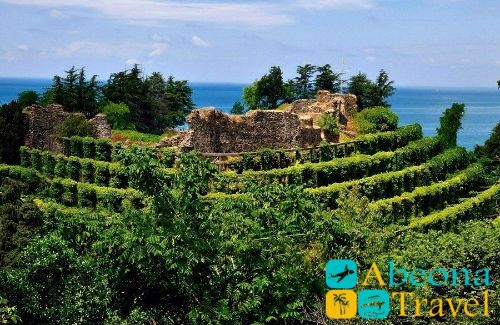 The fortress of Petra or Petra Fortress stands on a hill near Batumi, in the village of Tsikhisdziri in Georgia, right on the beach. Some 20 km separate this ancient Byzantine fortress from the main Black Sea resort of the country and 6.5 km from Kobuleti. The ruins of Peter’s fortress are located on a hill between the sea and the road.

A fortified city of Petra was founded in the 6th century by the Byzantine emperor Justinian I. The necessity for the construction of the defensive structure in this place was explained by the fact that it was here the trade route connecting Persia, Armenia and Byzantium with Western Georgia was taking place, transportation. In addition, such a profitable strategic location made it possible to rob the local Lazov tribe who inhabited this territory.

The terrain made it possible to build the central part of the fortress on a high cliff, which made it inaccessible from the sea. On the landside, small rocks and a strong stone fence served as a reliable protection. It was from here that the name “Petra” came, which in Greek means “stone, rock”. The combination of all protective factors made this fortification unattainable for the enemy, which gave rise to its second name “Garedji”, which means 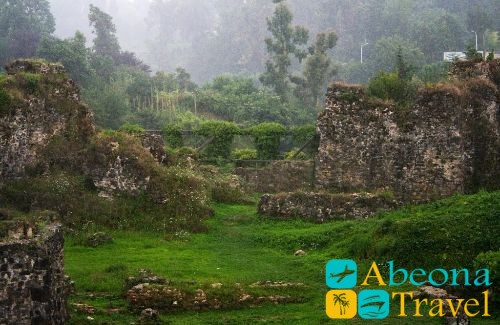 an enchanted fortress. Such a desirable piece wanted to have all the nearby empires, which eventually provoked a long, but successful siege by the Persians of this fortified city in the middle of the VI century. The Persians further improved the protection of the walls and left inside their numerous garrison.

In 549, Emperor Justinian the 1st decided to regain Petra and sent the army to her siege, totaling 8,000 people. But the inept command of the army turned into his devastating defeat. However, the war was still won by the Byzantines. And got hold the fortress in their hands, they themselves destroyed it so that henceforth the Persians could no longer seize it and cause them inconvenience. However, after years, this place again appeared in the center of military operations, although this time between the Russian and Ottoman empires. In relatively modern times, in the 1930s, the authorities decided to use this place with profit and built around the perimeter of the fortress multi-storey glazed reinforced concrete structures. Such a strange symbiosis of antiquity and modernity served as a Limonar.

The reason for its 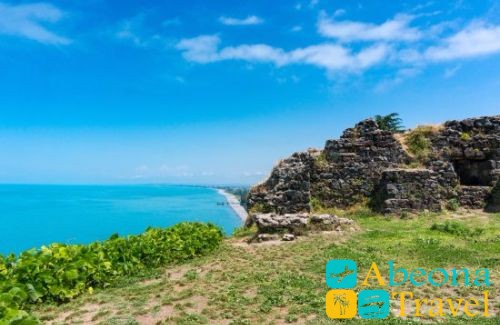 final desolation in the village of Tsikhisdziri is unknown, but I assume that it suffered the same fate as most of the Soviet non-residential buildings in the territory of Georgia after the collapse of the USSR – without proper financial recharge, specialized equipment and spare parts; they fell into decay and gradually began to collapse. The photo below clearly shows how Limonar was in the 50-s of the last century. And the photo above reflect its current state.

The stepped terraces are the main highlight of the fortress of Petra, semicircular closing the content. Terraces are abundantly covered with ivy. It creates a vivid analogy with the hanging gardens of the Semiramida. If you go through the central entrance, then it will as if cut these green corridors into two halves. At the very last level are the ruins of the Acropolis of Petra. Only the remains of the bath and the basilica have been preserved to this day. Almost at the very edge of the cliff, an unusual pit hides; its cunning is that it was once a clay oven for the preparation of Georgian “shoti” bread.