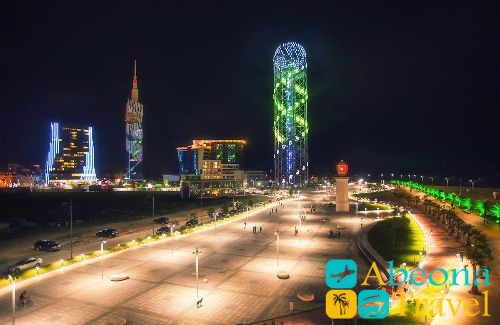 Miracle Park in Batumi or Wonder Park is one of the impressive modern places in Batumi. Traditionally, the park is called a resting place, where there are many trees and flowers. Miracle park is the exact opposite of this view. There is a lot of modern interesting buildings instead of trees and shady avenues.

In a hot summer day, there is not much rest. The better time to appreciate the beauty of the Park of Miracles is evening, when the illumination lights up. During the 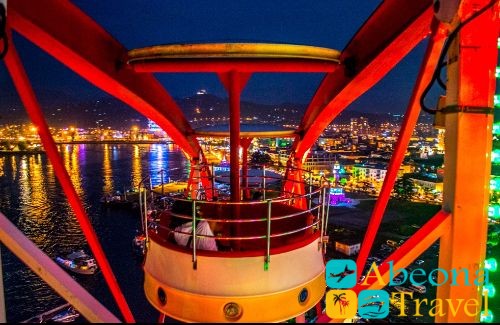 summer period, there are rented bicycles for many people, cars for children.

In the Miracle Park there is a place for skating skaters and lovers of extreme cycling. You can skate here all year round. Because the snow in winter in Batumi falls only for a few days. There is a large stones in the Park of Miracles instead of benches.

The history of the lighthouse in the Batumi sea port dates back to the Turkish rule in Adjara. Then, in 1863, the Office of the Ottoman Lighthouses built the first lighthouse in Batumi on the cape, not far from the Turkish fortress. The second lighthouse was installed already in 1878, after the transfer of Batumi to Russia. 21 meters high Batumi lighthouse was built by a French (Parisian) firm. A little later, a light optical device was mounted on the lighthouse. The lighthouse is built of octagonal stones, in its shape it resembles a dwelling house and 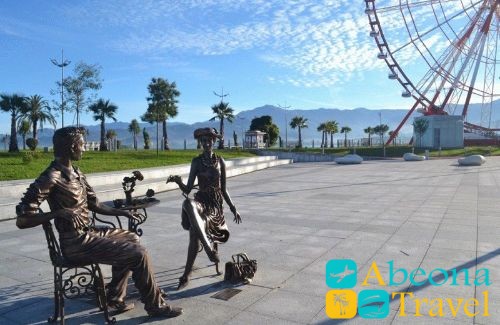 The Ferris wheel is 55 meters high. The wheel stood near the state university until 2005. You can endlessly admire the stunning views of the city, the sea, mountains and surroundings Going upstairs.

Statuary “Me, you and Batumi”

The sculpture “I, You and Batumi” reflects the tradition of coffee in Batumi. It is a bronze figure of a man and a woman drinking coffee at a table. According to the author’s Irakli Tsukadze idea, the third chair remained free. Anyone who wants to sit can take a picture there, in order to be photographed for memory together with the heroes of the sculpture. It is quite natural that this place became especially popular for tourists. And a rare guest leaves without photography.

The city of Batumi was a large resort town even in the USSR. Every week a lot of tourist liners came to the port, tourists from all over the USSR rested on the coast of Batumi. It is impossible to imagine Batumi without the yachts club. The yacht club was built during the Turks. It was a small harbor for small fishing boats. Yacht club is still works.