In previous centuries, Shemokmedi monastery complex was one of the richest monasteries in Georgia. Built under Vakhtang I, it was filled with ancient icons and Church utensils brought from all over the country. The monastery 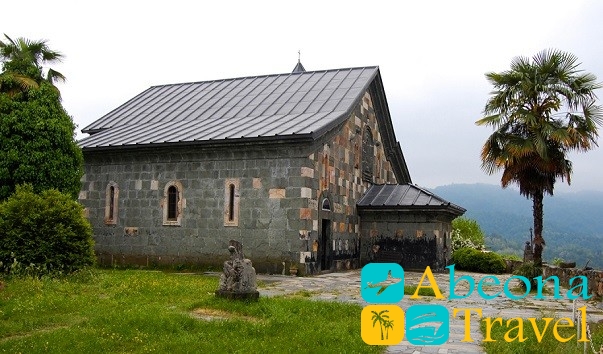 was also known for its library. According to the descriptions of historians, are kept chronicle “of Pudhari”, which tells about the life of Greek saints and about the history of the division of the Georgian and Armenian Churches. As well as the chronicle of “Gulani”, which contains about a thousand pages and captures the period from the XVI to XVIII century.

The entrance to the monastery is a small belfry Dating back to the XVI century. In 1831 it was completely restored. And the Russian Empire donated bells with outstanding sound and Church utensils. This is evidenced by the Imperial symbols that adorn the details of the inventory. The divine Cathedral was built in the XII century on the initiative of the Prince’s family Gurieli. Here Zemskogo monastery moved Zemskoy famous icon of the Transfiguration. Written in 886 – it is the oldest representative of the Georgian chased art of the middle ages. Nowadays, the Cathedral is closed for conservation.

The monks themselves try to preserve the ancient frescoes, most of which are now unreadable. And the reason for this is not the destructive ability of time and the past centuries. Unfortunately, the creations of ancient masters were destroyed by parishioners. In the absence of candle stands, people attached candles directly to the walls. In many places, the layer of putty burned to the masonry and was subsequently irretrievably lost.