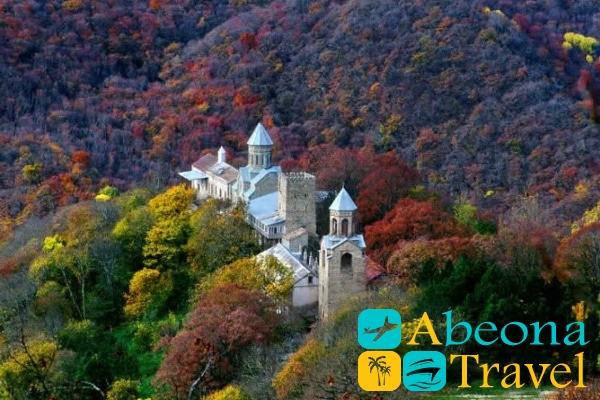 Nekresi monastery, preserved in the valley of the Alazani river, consists of several religious buildings of different times. Today you can see only the temple complex on the mountain. But even before our era at the foot of the monastery was a big city. Archaeological excavations revealed many of his secrets — there found ceramics, axes, many items of ancient life. However, to date the exact Foundation of the city failed. To date, from the ancient settlement there were only parts of the Foundation that rise above the ground. Earthen ramparts almost completely disappeared, there are “hints” on the city walls, and in some places the outlines of the streets. All buildings are made of gray stone, masonry is quite smooth and strong, which is surprising.

Later, a temple complex was founded on the very top of the mountain near the city. His creation is attributed to one of the Assyrian fathers, who first came to Georgia to preach Christianity. And his name was ABO Nekresi, also known as Abibus. His relics are kept today in Mtskheta in the temple of Samtavro, where he was executed by pagans.

The appearance of the first Church on the territory of modern Nekresi (Basilica) is associated with the 4th century. Later, other churches, the Bishop’s Palace, towers and household buildings began to appear near it. The “fate” of the monastery is quite tragic. At different times he was subjected to devastating invasions, looting and almost complete destruction of the monks. 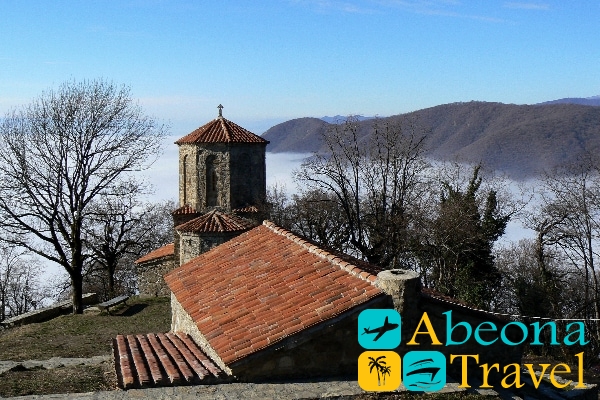 Georgians tell a legend that when once again Muslims tried to ruin the monastery, its servants surrounded the Church of the virgin with pork carcasses and Muslims disdained to enter there. Here and today echoes of this tradition are live — on big Orthodox holidays it is accepted to do a shish kebab only from pork.

The monastery complex underwent a large-scale restoration in 2010 and today its visit not only gives a lot of positive emotions, but also comfort to tourists.

The main Shrine is the Church of the blessed virgin Mary. It was built in the middle of the 8th century. The architectural solution is a Basilica with a large external gallery. Church itself is of interest for its unique frescoes and paintings on the vaults. The pictures here are fascinating — against the background of rough stone walls there are surprisingly bright biblical landscapes. And when the huge chandelier under the arch of the Church lights up, the inscriptions are perfectly visible. They are made in the ancient Georgian language. There are fragments of other writing, presumably Greek.

Then we go to the ancient Basilica of the 4th century. This is a very small building, at the same time there can be only a few people. Its construction is attributed to the reign of king Trdat. Coming out of the Basilica, you will see another Church — it has a domed view, built in the 9th century. Another Church is called “square” because of the shape of the facade. The interior is modest, with large crosses.

Bishop’s Palace in Nekresi – it is located almost on the outskirts of the temple complex. The Palace was built in the 16th century. Today you can get inside and see a huge room with a paved stone floor. This is a kind of exhibition-gallery, where on the walls hung a lot of paintings with biblical scenes and icons. The Palace is adjacent to a large fortress, it was built in the 16th century, it is perfectly preserved and today you can climb the stairs to the highest point and see the stunning scenery of the Alazani valley and all Nekresi.

Marani — wine storage is a spacious building, where deep holes are built directly in the floor. They store wine in large clay jars. In the center is a heavy wooden “ark”, resembling a boat — there are stored bottles, apparently. Wine storage has been completely restored, on the perimeter are pitchers. Monks keep here stocks of Divine drink which can be got for memory of visit of a monastery.

Nekresi is an active monastery, but you are unlikely to encounter monks and priests. They live just above the level of the temple, where you need to climb the mountain. But you will not be allowed there, Christian Ministers live very ascetically.