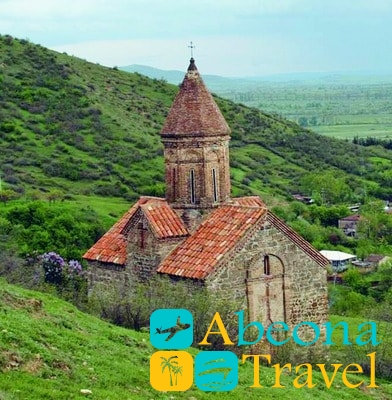 Manavi Fortress and Temple locate in a village Manavi. It is 55 km away from Tbilisi city center and 10 from Sagarejo. The village is famous for its small temple and fortress. They are located high on a hill. Very little is known about Manavi. There is information that the fortress and temples were built in the 11th century. And yet it is only speculation. It seems to be the king of Kakheti Imamkuli Khan moved back to his residence after frequent Lezghin raids. In 1812, near the village there was a battle between the Russian army and the Georgian rebels.

In 2006-2007, the fortress was cleared of bushes and debris by the efforts of students. They dug a sump and cleared some of the foundations. They found out that the cultural layer here reaches 2 meters and found ceramics of the period of late antiquity and the early middle ages.

Manavi Church is the main attraction of the sacred nature. It is presented in the form of a one-dome structure of small size. Many historians claim that the temple was built in the early 10th century. Throughout its history, the building has been repeatedly rebuilt and restored. At the moment, inside the well-preserved frescoes and paintings. Near the main altar you can see several ancient icons. Manavi Church is hard to miss, as it is located on a hill. It offers beautiful panoramic views of the local area.