Wine company “Shumi” is one of the leaders among the producers of high quality Georgian wines. The company was founded in 2001. The word “Shumi” in ancient Georgia meant real, undiluted wine. It has long been used as a term to determine the best wine. Wine symbol of the company became the Griffin (“Passenge” in the Georgian mythology). According to an ancient legend, it was the Griffin that brought people the first bunch of grapes, from which they then began to grow vineyards on the Ground.

The main advantage of the wine company “Shumi” – a full cycle of production of the so-called” closed cycle”, which includes all stages-from growing grapes and harvesting, to bottling the finished wine in branded bottles and its implementation through the famous trading houses with an impeccable reputation.

A distinctive feature of the company is that the activity began with the work on the cultivation of vineyards and only a few years later in 2001 began to bottle their own products.

Having vineyards in all microzones of controlled names by origin, “Shumi” produces almost All Georgian wines from the list of the highest category of quality (similar to the Bordeaux). The company also produces its own technology brandy “Iori”, grape chacha – ” Kakhetian chacha “and” Kakhetian chacha Special “– aged in oak barrels, organic (bio) wine and original, created by exclusive technology natural drink”Zig”.

Each stage of the production process from vineyards to bottling is strictly controlled in the winery noise in accordance with the requirements of international standards ISO22000-2005. 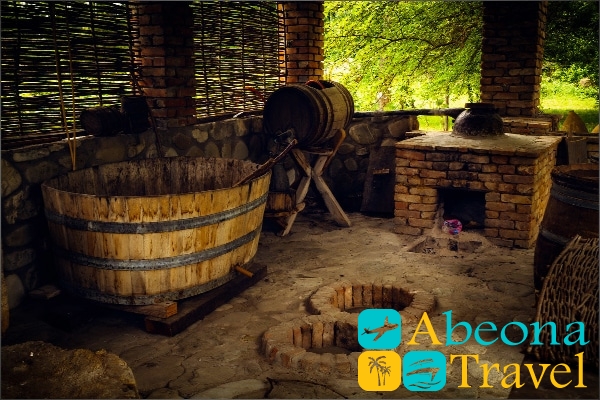 Company’s winery is located in Tsinandali, in the main center of viticulture-winemaking in Georgia. A territory of the plant is bordered by the National Park-Museum, owned by the famous Georgian poet and public figure of the 19th century, the founder of the first winery in Georgia, Prince Alexander Chavchavadze.

The plant is equipped with the most modern equipment to control all stages of the wine production process and is considered one of the best in Georgia. Plant has created a unique block of aging wine, equipped with high-precision own laboratory, providing physico-chemical, micro-biological stabilization of wines, thus making it possible to guarantee the stability of product quality. The vinification process takes place at a constant temperature control and stabilization system.

“Wine company Shumi” founded the only Museum of vine and wine “Vazioni” in Georgia today. The Museum is located on the territory of the winery and has a collection of vineyards of different varieties of vine, both Georgian, represented by 294 names,and 92 varieties of European. And in the exposition hall of the Museum (100 sq. m.) there are unique exhibits of the Georgian centuries-old history of vine and wine, where the oldest exhibit dates back to the IV Millennium BC.

In addition to the collection hall and the vineyard in the Museum complex ethnographic Department and tasting room, which are of particular interest to visitors, especially foreigners.

The company together with the leading tour operators of Georgia carries out wine tourism and for this purpose tourists are offered a tasting tour in the Museum “Vazioni”, which is very popular among both foreign and Georgian visitors.

In order to further expand wine tourism, it is planned to build a new hotel on the territory of the winery and the construction of a tourist complex.