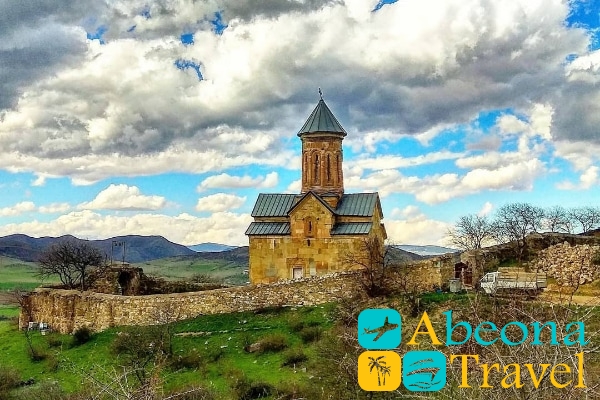 It is located in Bolnisi district, 2 km from Bolnisi Sioni. Usually Tsughrughasheni is called simply the temple. Although in different sources ambiguous defined temple or monastery. The website of the Georgian Orthodox Church provides data on Tsughrughasheni in the list of churches. It is located at an altitude of 620 meters above sea level, over a small river Bolnisitskali (Poladauri), and the final part of the road to the sights is on a dirt road.

Tsughrughasheni Monastery is surrounded by a small stone fence and has two entrances: the new South gate and the more interesting old West gate, above which the bells hang. All monastery buildings are hidden behind the temple. The main interest is the temple itself, which is covered with stone carvings. By the way, the style of decoration of ornaments and some details of the dome in the temple Tsughrughasheni, suggest that it was rebuilt at a later time. The interior of the temple is very modest – it is decorated with a few paintings on the walls and two large icons. The drum of the dome is decorated with double ornamented cornice; facades are decorated with double Windows, triangular niches and crosses. The building is guessed handwriting of two masters – elegantly decorated dome and window of the southern facade and the dryness of the rest — it is possible that part of the building was subsequently reconstructed.