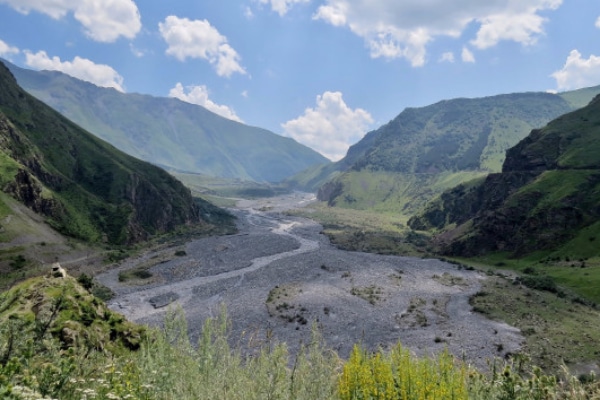 Between the villages of Lars and Kazbegi is the state border of Russia and Georgia. In Kazbek district, granites exposed in several places. The largest of them is the Darial granite massif – “iron gate” of the Georgian Military road. The Darial gorge in the Terek valley known since ancient times as a mountain pass. At different times, the gorge was called the Caucasian, Sarmatian, Iver Gate, which translated from Iranian (Dar-i-alan) means ‘Alan Gate’ or ‘passage of the Alans’, where the Alans lived – Iranian-speaking tribes, the ancestors of modern Ossetians.

On the first kilometer of the Darial gorge is the castle of Tamara, on the second kilometer of the Kist departs gorge, from which the Terek flows into the river Katinka. On the fourth kilometer, there is the Gvelet Bridge, where the highway passes to the left Bank of the Terek and goes further towards the village of Kazbek.

The height of the lowest part of The Darial gorge is about 1268 m, and the Gvelet bridge-1404 m. the Distance from the Gvelet Bridge to the village of Kazbek is 8 km, and with a rise of 306 m.

The Tamara castle are the remains of the protective structures of the Darial pass, erected in the first centuries of our 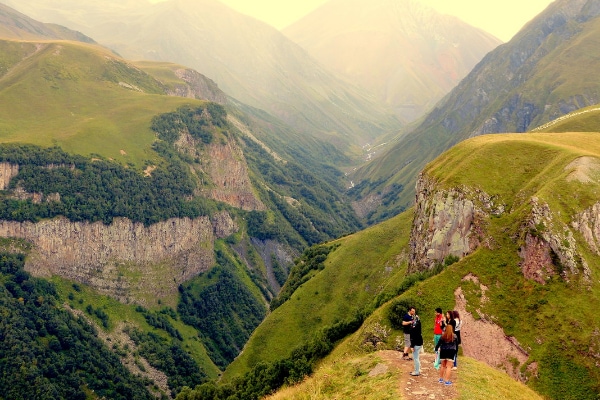 era (II—III centuries) and the rock on which it is located, rises above the Terek almost 60 m. and is located in the top of the gorge. Preserved as the Western tower, the remains of walls 1-2 m thick and carved into them arched passage. The first Builder of them is the Iberian king Mirvan of the dynasty of the Nebrotides, who lived for 150 years BC daryalskoe-ushchele-gruziya

In the first century BC, a high wall with an iron gate blocked the gorge. From the North and East, where the greatest danger was expected, the fortress was impregnable because of the natural steepness of the rock, from the West it could be approached by the isthmus connecting the rock with the neighboring mountain. Subsequently, a high wall blocked it and the fenced area turned into an additional area of the fortress yard.

Near the village of Upper Lars attracts the attention of a huge boulder lying in the floodplain. It Yermolov stone – geological monument of nature, consisting of grey granite, of gigantic proportions: its length is about 30 m, width 17 m and height exceeds 15 m. We see him not completely, because a good half of the boulder hidden under a layer of river sediments. The volume of the boulder is about 6000 cubic meters and a weight of 15,000 tons according to the geologists, it put here because of some great disaster, perhaps the collapse Devdoraki glacier. He could not roll down from the nearest mountains, as they consist of shale, and the boulder is granite. There is an opinion that the Ermolovsky stone is taken out here at the time of Quaternary glaciation.

Looking at this huge boulder, involuntarily you imagine what very destructive forces of glaciers and water work in mountains. Yermolovsky stone-traveler, one of the greatest boulders in Russia, the name given to him in honor of General Yermolov, who, according to legend, it signed a contract with the Dagestan Khan and liked to relax here, traveling on the Georgian military road. Darial gorge between the villages of V. Lars and Kazbegi reaches 13 km in length. The gorge, especially its narrow gorge, is composed of gray granites. This massif, according to geologists, slowly rises.