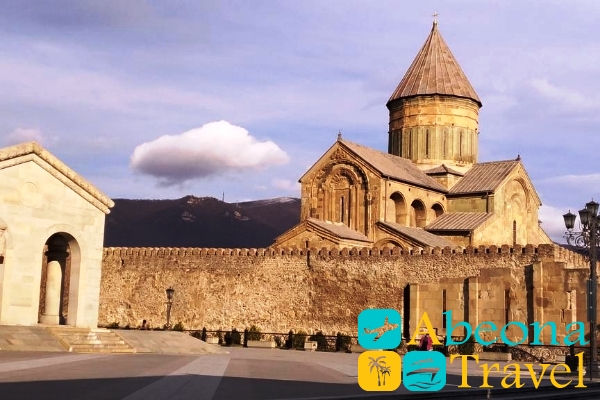 Not far from Djvari is the main Orthodox Georgian Church – Svetitskhoveli Cathedral. The Cathedral built in the XI century (1010 – 1029) on the site of the first Christian Church of the Twelve Apostles in Georgia, built in the IV century. With the emergence of this Church is associated religious tradition associated with the adoption of Christianity in Georgia. The legend tells about the resident of Mtskheta Elioz who, being in Jerusalem, got a Chiton of Jesus Christ. The sister of Elioz – Sidonia – died as soon as she 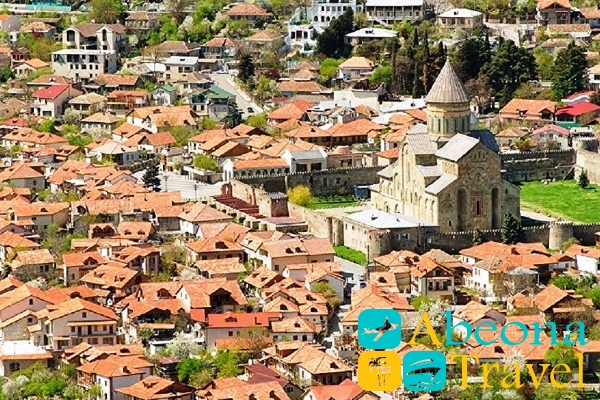 touched the tunic. She buried wrapped in it. Soon on the grave of Sidonia grew a large tree-Lebanese cedar.

In addition, when king Mirian decided to build a temple on the place where the Lord’s Chiton buried, the cedar was cut down. Wood carved seven columns and began to install them in svetichoveli church.  Six columns installed, but the seventh did not give in, hanging in the air. The Baptist of Georgia, St. Nino prayed all night, and then the column “without a touch of a human hand” froze on its place and started shedding Holy ointment. The miraculous chrism cured patients of heavy illnesses. Hence, the name of the temple – Svetitskhoveli, which translated from Georgian, means “life-giving Pillar”. One of the biggest religious holidays of Georgia – Mtskhetoba-Svetitskhovloba-is dedicated to this life-Giving Pillar and Chiton of the Lord. It celebrated twice a year (July 13 and October 14).

In the XI century, Georgian Catholicos Melchizedek began construction of a new Patriarchal Church on the site of the old Church. With this construction, too, is a legend connected. “For the construction of the temple was invited architect Arsukisdze. At the end of construction, it turned out that he built a masterpiece far superior to the creations 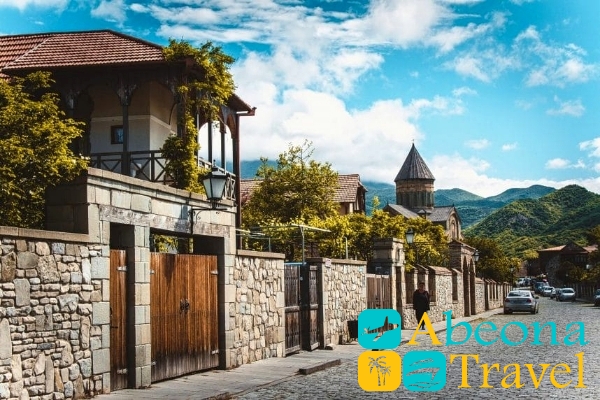 of his teacher. Then insulted the teacher has slandered the apprentice and the master cut off his hand. According to another version, arsukidze’s hand was cut off by order of the king, so that he could never build anything like Svetitskhoveli.” However, it is likely that this fact still took place, as over one of the arches of the facade of the Cathedral, indeed, placed a relief depicting a hand holding a square. The inscription under the relief reads: “the hand of the servant of God Arsukidze. Remember”

Under the big arch in Svetitskhoveli Cathedral, there is a legendary “Life-giving Pillar”. Before the altar is the burial of Georgian kings, including Vakhtang Gorgasali-the founder of Tbilisi, Irakli II-the king of Kakheti, the kings of the Bagrationi dynasty and others.

During the long history, the monastery repeatedly destroyed and restored. The most significant reconstruction was carried out first in the XV century, when the dome of the Cathedral and acquired its present form, and then in the XVII century, when the existing tent of the dome was installed, renovated, whitewashed the inner walls of the temple. Overall Svetickhoveli retained that noble shape, which gave to it in 1029, the year the architect Arsukidze.

Even in the middle ages, Mtskheta was the heart of the Georgian Church. Since then, according to tradition, and in our days, all the main inside the Church ceremonies, including the enthronement of the Catholicos-Patriarch, held in the temple Svetitskhoveli.