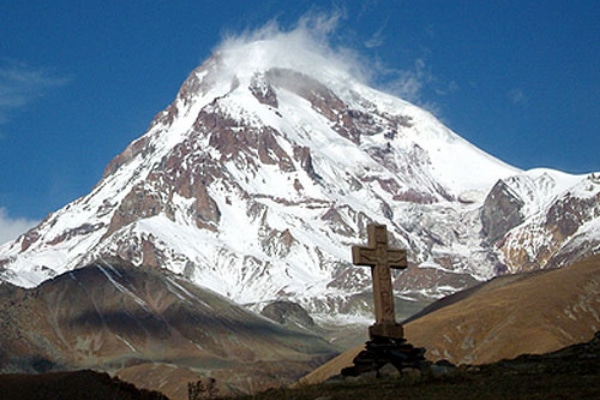 The name of Mount Kazbek appeared only at the beginning of the XIX century, and in the XVI – XVII centuries the volcano called Mkinvartsveri, which translated from the Georgian language means “ice top”, shat-mountain (translated from Ingush “Snow Mountain”) or simply “mountain near the village of Stepantsminda”. Kazbeg is an extinct volcano, the last eruption of which occurred about 6 thousand years ago. Interestingly, the eruption of the crater of Mount Kazbek in different times of its geological history alternated with ice ages. After the tragedy, when the Kolka glacier descended in the Karmadon gorge in 2002, 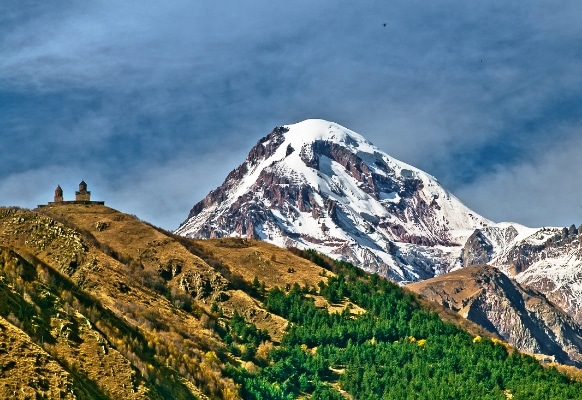 scientists recognized the gas-dynamic of Kazbek volcano on the glacier that led to its descent. It turns out that the volcano Kazbek is not so sleeping. The height of Kazbeg mountain exceeds 5 000 meters, and it is located on the border of Russia and Georgia.

The first ascent of mount Kazbek made by the Englishman D., Freshfield in 1868. In addition, Russian scientist A.V. Pastukhov conducted the first geological and meteorological studies at the top of Kazbek in 1889. The volcano Kazbek is associated with many ancient legends. At an altitude of about 4 000 meters in the rock of Kazbek was carved Betlemi monastery, which, according to the chronicle “Kartlis Tskhovreba”, served as a repository of Church shrines and treasures.

According to one legend, Prometheus (Pharmat) chained to Kazbek, who stole fire for people, but the gods punished him, and every evening the bird pecked the liver of Prometheus chained to the mountain. Attractions near Kazbek, you can note the Church of Gergeti at the foot of Mount Kazbek, where once housed the cross of St. Nino-the enlightener St. Nino. At an altitude of about 3600 meters is the building of the weather station, which is now not valid, and climbers use it as a temporary shelter. The picturesque gorges (Daryal, trousseau and Hiscoe) are Narzanov sources. In the area near Kazbek, you can see the Gvelet and Arsh waterfalls. In addition, in the village of Stepantsminda you can visit the local history.