Ananuri Fortress uplifted on the picturesque beach of Zhinvali water reservoir where Aragvi disgorges in it. Ananuri was the clue to Aragvi ravine and served as vanguards defensive position, blocking a road, which leads to Dariali ravine. Fortress was residence of Aragvi feudal dukes of Eristavi, playing the main role in political life of East Georgia in XVIII century.  Powerful rocky bastions of medieval palace uplifted over the settlement and buildings for public worship located beyond heavy crenelated walls.

There is no evidences regarding the life of locals in sources until 1720. Only known that fortress defense central part of Eristavi, while invasion fortress cover the retreat of locals and populations of central part of the country in mountains. The first witting regarding Ananuri can found reported religious strives of Eristav’s with each other in XVIII century in the writings of Vakhushti the chronographer. There is a gravestone recall baldachin in the small dome type church in citadel. Moreover, there is a lettering on the stone telling that Ana-khanum Abashidze order to uplift that monument in 1674 and her husband Edisher, eristav Otar and eristav’s son George buried there. 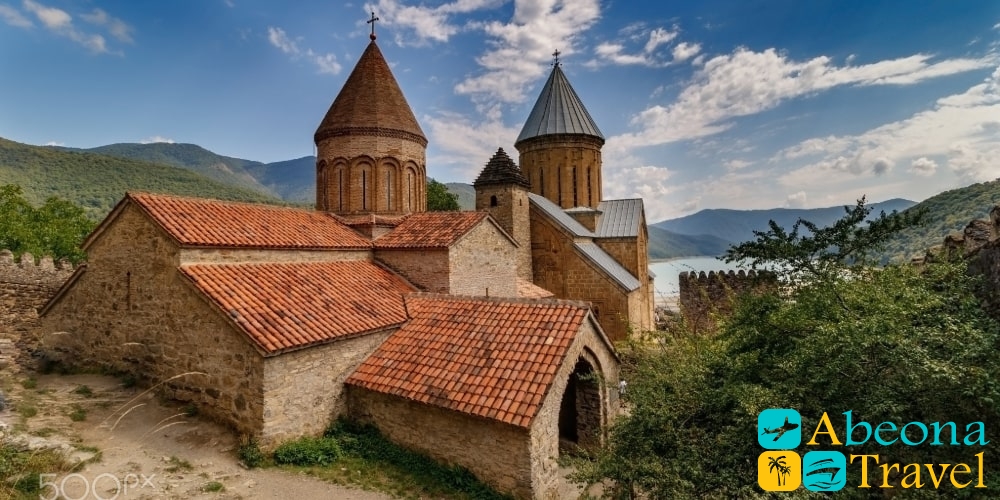 Historians are equal of the opinion that small dome type church Ananuri uplifted not later than 60ies of 17 century. Next writing located on the south wall of big dome type church telling the church uplifted in 1689 by mdivanbeg Bardzim.

One of the most dramatic pages of Ananuri fortress history happen in XVIII century during feud Eristavi army in Ksani river ravine siege Ananuri, siege was lasted too long and ineffectual, until Ksani army come to conclusion to destoy underground water pipe deprive with drinking water defenders. Aragvi’s army capitulate but with the condition that they will keep their life. However, when they saw the gate was open they forgot an assurance, killed everybody, and defiled the church. Based on legend after this Eristavi family was accursed for perjury and blasphemy. Ananuri rebound after that crushing defeat and become residence of King Teimuraz the second and his son Irakli the II.