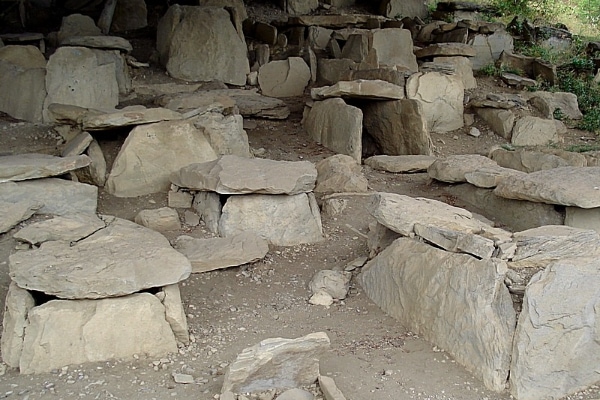 Samtavisi Cemetery, an extensive (approx. 18 hectares) multi-temporal burial ground on the Northern outskirts of the ancient Mtskheta. Named after the nearby monastery of Samtavro. The burial ground was dug out in 70-80-ies of the 19th century, and on a large scale and systematically – since 1938. The burial ground was the main cemetery, as urban-type settlements at the confluence of the Kura and Aragvi rivers, and established on its basis in Hellenistic times Mtskheta — ancient capital of Kartli. About 3000 different burials have been excavated and stratigraphy of the burial ground since the middle bronze age has been established (ser. 2nd Millennium BC) and ending the wound of the feudal era (4-8 centuries ad). Especially rich archaeological material were layers with soil burials of the late bronze and early iron ages (con. 2-beginning of the 1st Millennium BC), as well as the burial of the late antique time (tombs of stone slabs, tiles and ceramic. plates 1-3 centuries ad) and early medieval stone boxes, sometimes with clay sarcophagi inserted into them. There is a kind of burial in a huge wine vessel (Kvevri) over the last three centuries BC burials include weapons, tools, magic tools, ceramics, glass, jewelry, coins, etc.

The finds in the burial ground created a reliable chronological scale to recreate the history of Mtskheta and the culture of the East.-cargo. Tribes for 2.5 thousand years. The funeral inventory from all layers of the burial ground finds analogies in many other necropolises of the Caucasus and Front Asia. Having received accurate Dating, the burial ground became one of the leading monuments in the archeology of these areas.