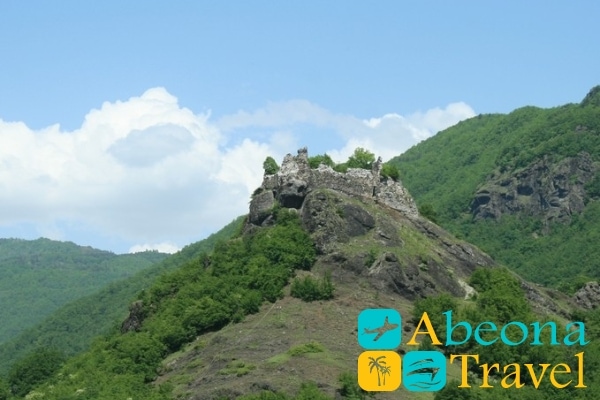 The tower of Machabeli is in a historical center of Ambrolauri, on territory of former summer residence of king’s of Imereti; Built with a stone, lime and sand; Performed the duty of observant post. Built in XVII of century the Name “Tower of Machabeli ” originates from the legend that tower and summer residence Tsar Solomon presented to the refugee Machabeli. In the complex of residence also there was a palace and court church. Ruins of church in 1924 were examined by George Bochoridze. He found out the gravestone of Joseb Machabeli in the floor of church, that confirms reality of transmission. A tower is now restored.

The fortress of Minda is located in a village Tsesi, at confluence of the rivers of Lukhumi and Rioni, in the center of former principality of Racha. It is the largest fortification fortress in Racha, former residence of Racha eristavs. The fortress of Minda is built by the mixed materials and lime. In a church appears there was a court church. According to a legend, built in XI – XII century by order of queen Tamara by a prince of Racha. “I want a fortress here” – a queen ordered and on this high hill built a fortress. In the XIX century a fortress suddenly again shows up in history. When in 1819 began Imereti revolt which soon was thrown on Racha. Small detachment of Russians soldiery appeared besieged in this castle. In April, 1820 general Gorchakov entered with an army in Racha and relieved a fortress. Thus Gorchakov got hold some important documents, allowing to arrest all, participating to the revolt. After this history the fortress of Minda falls out of history and as though forever. The fortress of Minda in 1991 was injured by earthquake. 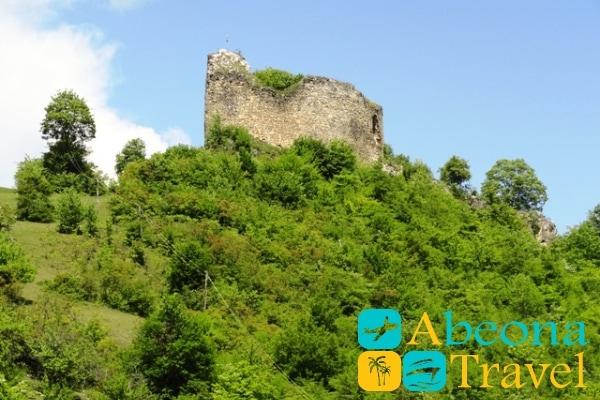 The fortress of Saiashvili stands on a right bank of river Ritseula, on a high rock. On the type of building behaves to the middle eyelids. Her old name was “Kasrauli fortress”, because belonged to the last name of Kasradze and then passed to the hands of Iashvili and gets the name “Fortresses of Saiashvilo”. Comparatively two towers, remains of protection, clay pipes, cellar of fortress, were well saved with barrels, one of that 365 poods. In a fortress there is an of prayer place of Saint Ilia. A source flows out at the foot of fortress. A fortress-complex strongly suffered a fortress at the earthquake of 1991.

A fortress of Khotevi is in a village Khotevi, on the left coast of the river Khoteula. Built in XVII of century by Merab Tsulukidze. Tsulukidze got princely rank king of Imereti from George III in 1605. The name of “Khotevi” originates from a word “Kho etevit” (translated as – do you have enough place to stay.

A fortress strongly was damaged at the earthquake of 1991.

In the church built in X – XI century the short, but wide and high hall built on an original plan and outside many-sided altar attracts attention. Building from within and it is outside finished by wonderful decorative patterns. External walls are decorated by the wonderful painting, where together with biblical personages mundane persons are represented. The incomparable standard of art is south door. On a historical version a church was renewed in 1884. A church is damaged in 90th from an earthquake, but already recovered.