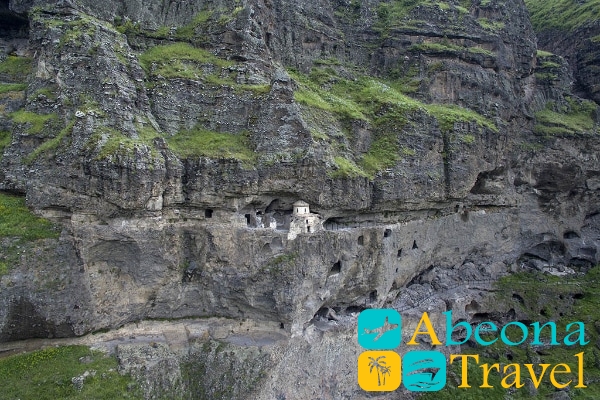 Vanis Kvabebi Monastery is less known cave monastery dated by 8 century AC. The famous cave town of Georgia Vardzia was constructed only 400 years after Vanis Kvabebi had been constructed. There is a little known about the monastery, only is known that is was nunnery. The strictest legend says there was a very strict regulations women were punished very badly and even were hurled down from the rock.

Protection wall was constructed in 1204. Vanis Kvabebi monastery has 19 cave levels. 3 churches were located on the territory. And two of them are preserved to this days.

One of them Saint George’s church is located at ground level. It is believed that building was conducted among with the construction of the main cave monastery. Outside wall is not preserved to this days. Although according to some data initial height was 12m. The interesting thing is a 1.5m high little room which is the basis of the construction, which is look like the tomb-chest. But it is unknown who was honored to be buried there. 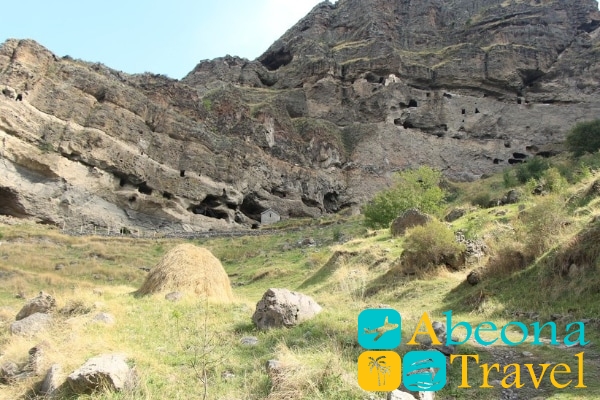 The second church of Vanis Kvabebi monastery is the little white church up on the hill around the grey mountain, it was constructed from fieldstone and brick that is why is known as infill building. It is too difficult to define the date because it doesn’t belong to any of the architectural style in Georgia. There is no evidence regarding this church in chronicles. It is a mystery how it was constructed.

The third one is ruins of the big hall in the cave, probably it was the main temple of the monastery but it is only say-so.

This rocky monastery has a unfortunate faith as well as many other Georgian sights. Vanis Kvabebi was damaged during an earthquake in 1089, 1283 and 1319 after that the temple was invaded by Persian army. That went to the possession of the Turkish Empire and was looted after liberation. And finally this carved in the rock monastery-temple stop functioning and monastery Vanis-Kvabebi is uninhabited now.