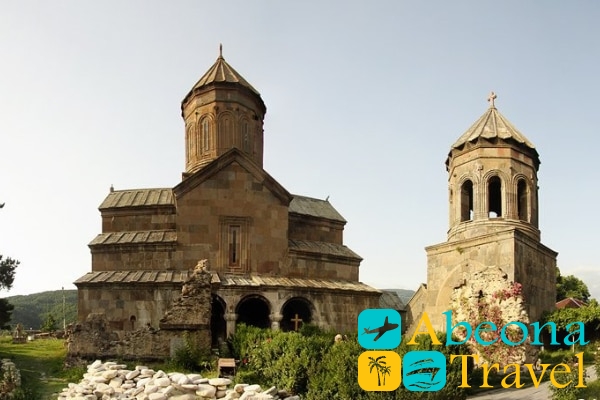 Friary Zarzma Monastery in honor of Dormitory of Holy Mother was founded between VI-IX centuries. Founder was Serapion famous as Serapion from Zarzma. He came to live here with his brother from Tao-Klardjeti. Duke George Chorchaneli gave monastery an area. The first temple was built by architect Gorbneli but didn’t preserved. Present Zarzma monastery was built in the beginning of XIV century by the rule duke Beqa Mandaturtukhutsesi. The most ancient preserved painting is dated by X century. It is carved on the arch by an entrance saying about military campaign of Georgian kind David the third Kurapalan against Barda Sklir bear arms against the Byzantine Imperator.

Complex Zarzma among with main temple consist of bell chamber, chapel, ruins of two small church and water source. Bell chamber is considered to be one of the biggest one in Georgia. Is the most original one and is a concurrent to bell chamber of Gudarekhi. In 1577 bell chamber was renovated and turn to church. After some years Turks came and monastery became uninhabited and left that way for 300 years. Only in XIX century by the times of Russian Imperia monastery was renovated there is a frescoe proving this fact.

Temple is middlemost-domed, four frontal face are decorated by ornaments, doors and windows are covered by leafy and geometric forms. The second decorations is bell chamber according to the stories if the locals’ secret tunnel was started here and go down to the river. Tunnel is full with the ground no. Undecayed remains found on adjacent area are saved in Zarzma, possible belonged to monks. Today Zarzma is actove friary.