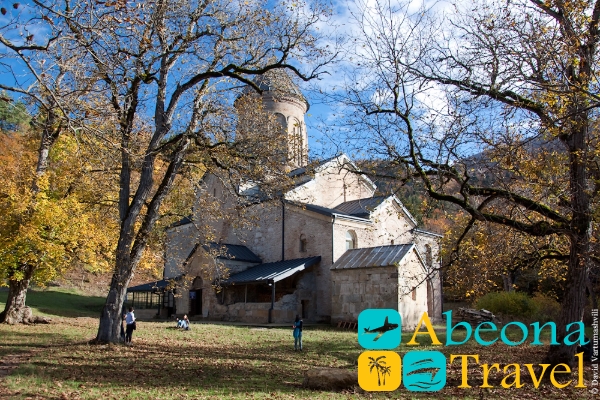 The current Kintsvisi Monastery is located in the picturesque gorge of the Dzama river. It was in the land of the Tsitsishvili princes, and the valley where it is located is now called the Monastery valley. It is known that the medieval monastery was built around 1200 during the reign of Queen Tamar. On the one hand, the monastery is naturally protected by a gorge, on the other there is a complex-three churches, a bell tower and a piece of preserved wall that adjoins it.

The main building-built in the early XIII century and dedicated to St. Nicholas cross-domed Church. There are many famous frescoes of the time. They date back to 1205, at that time they were the most beautiful paintings painted in Georgia. Also here you can see a portrait of Queen Tamara. Image lifetime, although it is possible that during the construction of the temple, she died. The value of the frescoes is also high, because there are very few of them preserved in Georgia. And the fresco with the portrait of Queen Tamara is one of the three images of her in all of Georgia. There is also a portrait of George III, Prince George, as well as the so-called ktitorskie portraits, ie portraits of those people who have allocated money for the construction of the monastery: Anthony Sagirisdze (local feudal magnate) and Zaza panaskerteli who under Queen Tamara was the first Minister. Next to the great temple, on the West side, there is a small chapel named after St. George. Recently it was painted again, although compared to the main building of the monastery, it was created recently.

Another building on the territory of the monastery is much older. It’s not even a Church – St. Mary’s Church. Its masonry is a thousand years old, it was laid in the X-XI century. The Church of St. Mary is the oldest in the complex. It survived even during the earthquake of 1940, when part of the main temple collapsed into the gorge. The remains of long-destroyed premises can be seen on the street, next to one of the parts of the temple. Little is known about the history of the temple. It is not known when the temple was abandoned and how long it was empty. It is logical to assume that this happened after another RAID on the local lands of the conquerors. For some time since 1997, by order of Metropolitan job, the monastery was a women’s monastery, but from the beginning of the two thousandth it was reorganized again and it became a men’s monastery.