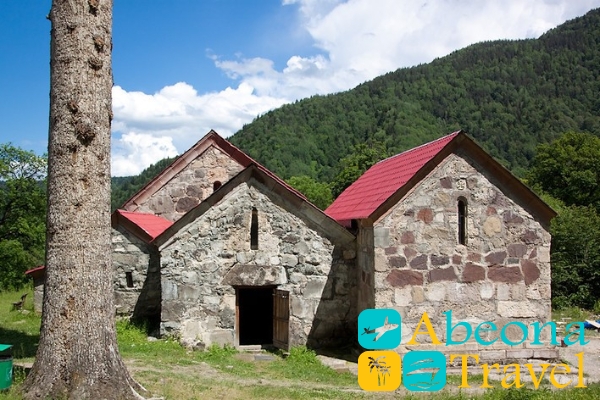 Since ancient times, Dzam gorge due to its favorable geographical position was considered one of the most important junctions of Kartli. Near the ancient city of Masorati (sovr. der. Ortubani) was built the fortress of Dzama – the Outpost of the region.

The first monastery founded in the gorge was The kozifa monastery founded in the VII-IX centuries in honor of the Introduction of the blessed virgin Mary to the temple. The monastery complex consists of 5 churches, the earliest-the Entrance to the Church of the blessed virgin Mary-dates from the VI-VII centuries. the Church is composed of hewn basalt slabs with traces of painting, ornamented iconostasis of canclian stone. The Church in the name of St. Shio Mgvime preserved almost intact, All saints Church destroyed, the Church in the name of St. George and in honor of the resurrection of Lazarus is currently in ruins.

The monastery complex occupied a vast territory, where cells were placed and outbuildings were carried out water supply. In the XIII century, the monastery reached its peak and then for a long time played a significant role in the spiritual life of the region, despite the numerous raids of invaders. In the XVII century. the monastery fell into decline and resumed its activity on June 17, 1997 Under the Metropolitan of Ruiz-Urbnis job (Akiashvili). Around the complex partially preserved the surrounding wall, the construction of which presumably dates back to the XIII century. There is another interesting place on the territory of the complex: an underground crypt, which stores the relics of monks who were martyred at the hands of foreign invaders.