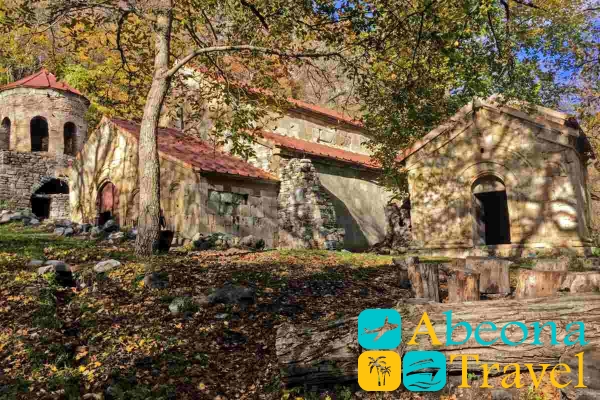 Rkoni Monastery, dating from VII-XVII centuries, is located near the village of Chachubeti in the Caspian region, near the ruins of the village of Rkoni. The oldest monument of the complex is the Church of the virgin Mary (VII century). In the XIII-XIV centuries were built the gate of the Church of the virgin Mary, chapel, Church of John the Baptist and refectory, tower Svimon Mesvete; bell tower XVI-XVIII centuries, living room and utility rooms. At a distance of 0.5 km from the monastery, on the Tedzami river there is a bridge span – the best example of bridges of medieval Georgia.

Rconi monastery was built from the very beginning for the purpose of refuge. The fortress, located on a hill a few kilometers from the complex, is another argument in favor of this assumption. Apparently, the fortress of Rconi was intended to protect the monastery and the evacuated population there in the event that the enemy could get into this remote area. In 1400, Tamerlane visited here, defeated the neighborhood and reached the monastery complex and the nearby village of the same name.

In the XII-XIII centuries, a significant trade and military-strategic route ran along the Rconi, which connected Shida Kartli with Javakheti and Trialeti, and then, through Armenia, with the Middle East. This factor contributed to the construction of monasteries in and around Rconi.

On the territory of the monastery complex across the river Tedzami laid Ronski bridge or the bridge of Tamara. The bridge dates from the XII-XIII centuries. it is a semicircular, solid, monolithic structure with a length of 12.5 meters, a width of 2.2 m, at a height of 7.6 m from the surface of the river. Built of broken stone and thick lime mortar. The bridge supports stand on a natural rock base. The bridge has been preserved in its original form and is the best example among the bridges of Georgia of the feudal period.