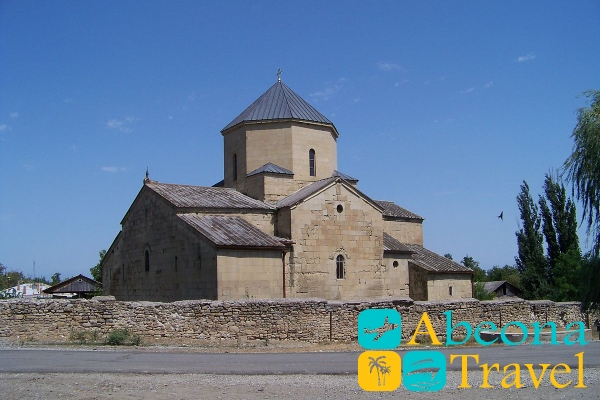 Tsromi church (626-634/635) – a dilapidated temple in the eponymous village of Southeastern Georgia was built by decree of Kartli eristav Stepanoz II. Information about Tsromi church is very scarce. The place itself is mentioned in the biography of the Georgian first Martyr Razhden – the first Saint canonized by the Georgian Church. A Persian by birth and a follower of Zoroastrianism, he was the mentor of the daughter of the Persian king Yazdigerd II, who married the Georgian king St. Vakhtang Gorgasali. Together with her, the future first Martyr arrived in Kartli, where he received Holy Baptism, and when war broke out again with the Persian king Peroz (457), Saint Razhden led the Georgian army in the capital and in the nearby fortresses. The Persians seized a fellow tribesman, and, failing to persuade him to fire-worship, crucified him on the cross in the town of Tsromi.

The first great destruction of the Cathedral was followed in the earthquake – affected also and the little Church next door from Tsrom within a radius of 12 km the Second destruction, again due to the earthquake, occurred, according to the work of restorers in the XVI-XVII centuries, Recent historical destruction, which the structure could not bear, it was an attack Lezgins in 1731, after which the structure fell into decay and was not repaired until the mid XX century. In March 1937, work began to clean and restore the roof of the temple, but an earthquake on May 8, 1940 again damaged the Cathedral. In the 1960s, the last restoration took place