Borjomi Resort is one of the most important balneo-climatic resorts in Georgia. On the left bank of the Kura is the beautiful Likani locality. Coniferous forests, clear air, mineral water tend to healing and rest. You can stop in 3-4 * hotels, private hotels of high quality. The main curative factors are the world-famous bicarbonate-sodium mineral water and an average climate. The natural water temperature is + 28-33 ° С. Water is prescribed of the digestive and metabolic organs diseases. Water is used mainly for medical drinking, baths, irrigation, inhalations and other procedures.

Borjomi is a mineral water widely known in the former USSR and beyond, from the city with the same name. Water is extracted from 9 production wells with 200 to 1500 m depth in Reserve, under natural temperature of 38-40 ° C for thermal water. Mineral composition of water has not changed since 1830, from the beginning of constant laboratory observations.

The history of the Borjomi gorge is directly connected with mineral waters. Thanks to the wonderful nature, unique healing climate and mineral water of Borjomi became famous worldwide. Area is named according to the legend came from two words: "borj" - "fortress wall" and "Omi" - "war". Previously, fought often, and the Borjomi settlement was favorably located in the gorge. The mountains around became the very fortress wall, and watchtowers were built on the slopes of the gorge.

Archaeologists believe that the sources were known in ancient times. This is evidenced by the finding in the beginning of the 20th century 7 stone baths dating from the beginning of the first millennium AD. Apparently, in those days this water was used for bathing, and not for drinking. Then the sources were again permanently forgotten, and the places where they are located are abandoned.

The second source, as it is not surprising, was given by the military - in 1829 in Borjomi the Kherson Grenadier Regiment was billeted; once the soldiers found a spring in the forest on the right bank of the river Borjomki, which looked like a pit filled with warm water with a sharp smell. The colonel was interested, ordered to clear the source and carry bottled water to the regiment. Suffering from stomach disease, he first tested the effect of mineral water himself, which turned out to be so beneficial that he ordered to enclose the source of stones and build a bathhouse nearby and a small house for himself. He also recommended water to his acquaintances for the improvement of health.

In 1837 the Kherson Popov regiment was replaced by Georgian grenadiers regiment. Regimental doctor Amirov began to investigate the composition and action of mineral water from the source. He also sent the first samples of water to St. Petersburg and Moscow.

By 1841 the water become so well known that the governor of the Tsar in the Caucasus brought his sick daughter to Borjomi for treatment. The story of her suffering was silenced, but the water greatly helped her, in her honor the governor named the first source Catherine, and the second - found and landscaped by this time - Evgenievsky, in his honor. In 1850, the Borjomi Park was divided into a mineral water park, and in 1854 the construction of the first casting factory was started.

Meanwhile, the glory of healing springs has already spread throughout Russia. Borjomi began to grow. New palaces, parks, squares, hotels were built. In 1868, a bridge was built across the Kura, named after Olginsky in honor of Prince Michael Romanov wife. The bridge stood exactly 100 years, and was carried away by the flood in 1968. The railway line from Khashuri to Borjomi, carried out in 1894, significantly improved the message - before that they rode on horse-drawn phaetons, and the route from Tbilisi to Borjomi took about 8-9 hours.

Nikolay Mikhailovich spent a lot of time in Borjomi. Not only a passion for hunting was holding him there, but also another love - palace keeper Varvara. In 1894, Mikhail Romanov builds a casting factory in a mineral water park. The plant worked until the 50-ies of the XX century, regularly pouring Borjomi, known by this time already around the world. In 1896 the first glass factory was opened. Bottles were blow out manually until 1950. In 1897, Mikhail built in Borjomi the first power plant with a capacity of 3 thousand horsepower, which supplied electricity in those days Borjomi Gorge and three adjacent areas. She worked until 1958.

In 1904, it was possible to partially mechanize Borjomi production. Glass blowing was still done manually, but the bottling was already mechanical. The same year the announcement in the newspaper about "selling mineral water Borjomi wagons" is dated. Water casting goes with might and main - if in 1854 only 1350 bottles were taken from Borjomi, then in 1905, after setting up production, the export reached 320,000 bottles, and in 1913 - exceeded 9 million bottles. Under Soviet rule, Borjomi became a resort, and in 1921 the village of Borjomi received the status of a city. Here came the most famous people of the era, and the former royal mansions became a governmental residence.

In the palace of Nikolay Mikhailovich Stalin was settled, who lived there in 1926 and 1951. In the building of the chancery of the Borjomi tsar's estate built in 1890, the district party committee was located, then the Komsomol, and in 1926 a forest museum dedicated to local nature and tree species was opened. From 1937 to 1949, the KGB was home to the museum at the same time as the museum, and in 1938 the museum received the status of local history, and began collecting not only the species of the tree, but everything that concerned the Borjomi mineral waters and the resort. 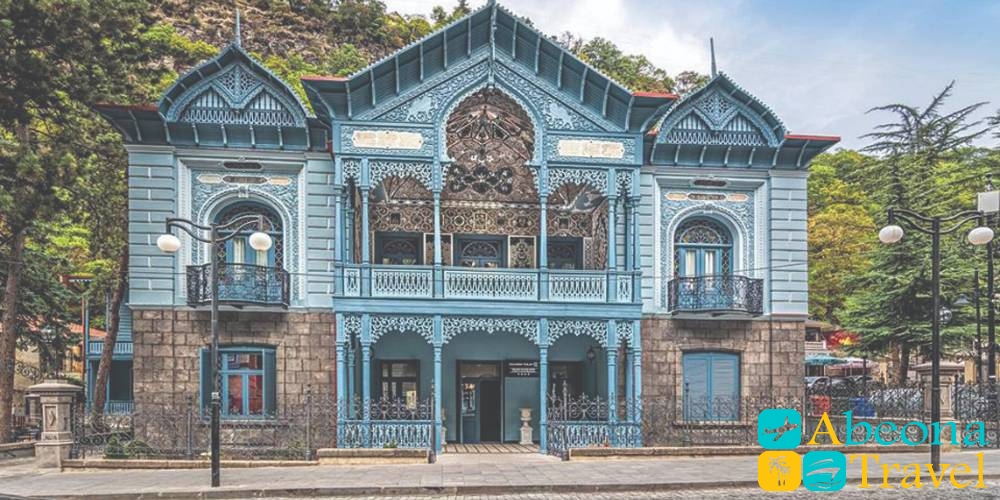