A young resort Gudauri is located 120 km far from Tbilisi, which is developing rapidly offering its guests new routes, hotels and entertainment. Located on the southern slope of the Greater Caucasus Range, among the snow-capped peaks and deep gorges dazzling in the sun, Gudauri boasts wide comfortable slopes of varied steepness, a beautiful snow cover from December to April, a mild climate without strong frosts and icy winds. Season starts from the second half of December. At the peak of Gudauri is covered with a snow cover of 1.5 meters. The trails are equipped with lifts; the lower station is at an altitude of 1990 meters. And the upper one at an altitude of 3307 meters. This is a paradise for free riders. Do not see the Great Caucasus Ridge from a bird’s eye view – this is a crime.

Gudauri has five cable lifts and a gondola in total. There is a training slope with a small drag lift about 600 m in length. The total length of the trails is 50 km. Red and blue tracks equally, black minority. The average length of the trails is 2-3 km; longest descent is 7 km. The height difference is 1000 m. And the total number of trails is 22. On the first track there are snow cannons; 20% of trails for professionals 80% – for amateurs. There is slalom, slalom-giant, super giant and downhill routes. Trails are certified, competitions are held. In Gudauri at the same time can accommodate up to 2 thousand skiers, and the capacity of cable cars is 4 thousand people.

But apart from all this, Gudauri’s main charm is that you do not have to walk a lot straight from the cable cars you go to the untouched snowfields and then you return to the track.
The working hours of the ski lifts: in the winter from 10.00 to 17.00, in the spring from 9.00 to 16.00.
Evening skating: The track under the first turn is highlighted on Fridays, Saturdays and Sundays from 8 pm to 10 pm.
From July 16, 2016 from 10.00 to 16.00 every day in Gudauri all lifts work.

The first queue, about 1000 m long, is a slow triple-chair; begins from the hotel “Marco Polo” at an altitude of 1990 meters. The track under it is illuminated during night skiing. There are always a lot of children. Track is suitable for beginners. It may seem a bit complicated, since there are two places with steep slopes, but everyone can come down carefully.

About 2300 m long is the second queue – the four-chair, rises quite quickly. From here it is possible to climb further to the third turn to Mount Kudebi (elevation 3007). Or roll down to the gondola lift or again down to the top of the line. There are trails for both amateurs and professionals.

The third line, about 1000 m long, rises to the top of Mount Kudebi at an altitude of 3007 meters – a three-chair, from which it is necessary quick jump off and run, otherwise that season often overtook and gave a kick. From Kudebi there are two routes: one to the top of the line, the second to the fourth and fifth cable cars. There are wonderful rocks for jumping and virgin lands (if you get up early).

The fourth line is about 1100 m – three-chair. Through it is convenient to move from the gondola to the fifth turn. Under the cable car is an ideal route for beginners: straight and level.

The fifth stage, about 1,400 m long, rising to the top of Sadzeli Mountain at an altitude of 3,268 meters, is a four-chair. From the top you can go down the slopes, but you can go along the ridge and free ride. But you need to be careful; sometimes you pull snow-slope down.

The gondola lift Doppelmayer 2800 m length accommodates 8 people. The road crosses along the diagonal half of the entire slope of the resort. But 9 minutes you rise in the heat. From the gondola, you can change to the 4th turn, or roll down to the second, or go to virgin land in the fields. To get initially to gondola, you need to climb by car on the road further to the second stage.

Paragliding and speedway school in Gudauri

Who has known free ride and heliski, can try themselves in paragliding. Only not in the usual way, but on skis =) It is easier to take off skiing than running, and a sufficiently high speed is achieved. You can fly by yourself (if you know how), and with an instructor.

A full rate of speed grading for beginners includes a 7-day program of theory and practice from 10 am to 3 pm. Of course, classes are held depending on the weather. Equipment rental is included in the price.

Two companies employed Heli-ski in Gudauri: Heliksir and Wucher. The cost of a one-day heliski program in Gudauri: 650 Euros per person for three vertical descents. The difference in altitude of each descent varies from 500 to 1000 vertical meters. Helicopter: Euro copter AS350 B3 Groups of 3 to 8 riders are formed, the route is chosen based on their level of skating. Each group is accompanied by two certified guides. The price includes: equipment (wide skis for powders, sticks, avalanche probes, beepers, ABS rucksacks). Not included in the price: ski boots, snowboards and helmets.

The cost of free ride programs starts from 100 GEL per person (about 2000 rubles). With more people in the group, the price goes down. They offer free ride programs in Kobi and backcountry and free ride on Bidara Mountain. Beeper can be rented. If you are not very familiar with the terrain, then we recommend taking a guide. 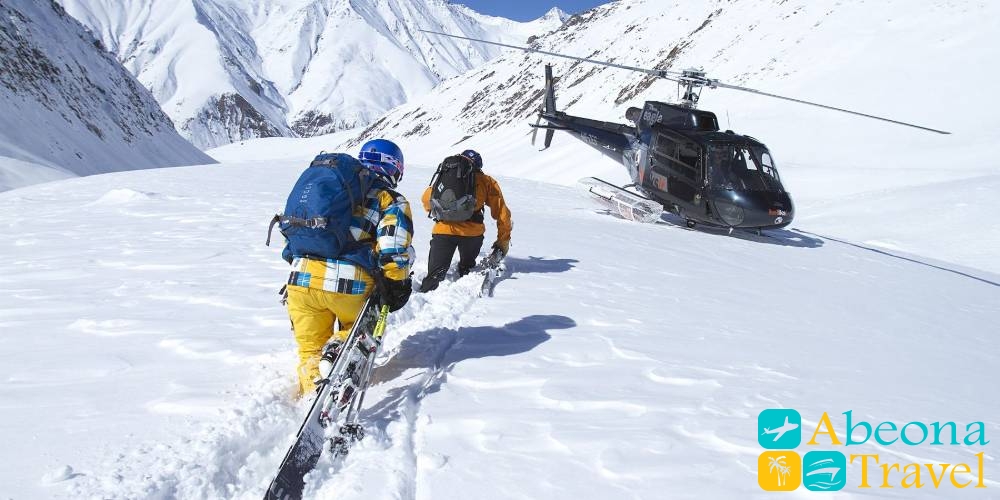 Nightlife Gudauri is not very developed. Sometimes it seems that the skiing town is asleep and all fantasies to have fun often end in a bar. Emotions that accumulate throughout the day overwhelm us and sit in the hotel is not very much what you want. 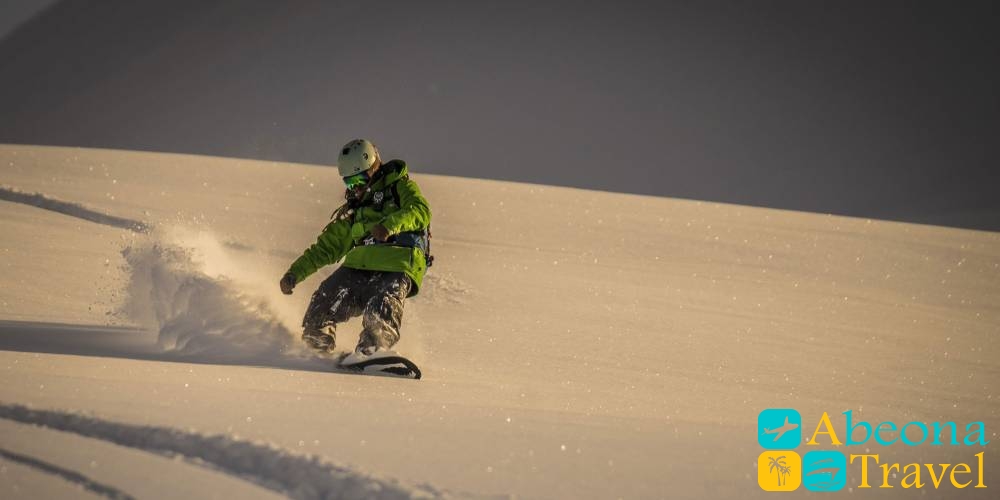 Resort Gudauri is named after the homonymous mountain village. Gudauri is located near the Cross Pass (2379 m above sea level) and 43 km far from the second highest peak in Europe - Mount Kazbeg (5047 m.).

Gudauri is located on a small plateau, at an altitude of 1900 - 2200 meters above sea level, along the Military-Georgian road, 120 km from Tbilisi, 150 km from Tbilisi airport, and 79 km from Vladikavkaz.

Development of the ski resort Gudauri began in 1975 and continues to present. In the late 70s of the last century, the first lifts of the Doppelmayr were created. Since 2002, mass construction of small private hotels began in Gudauri. 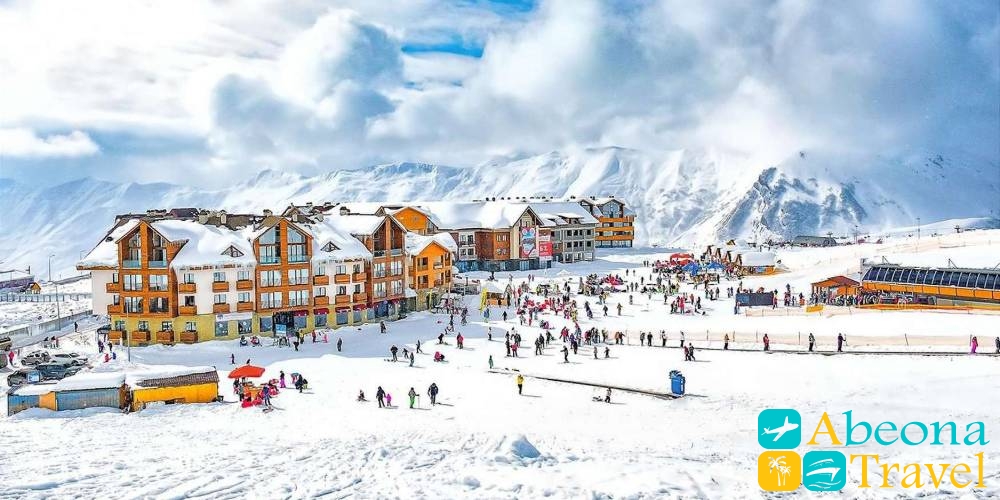