x Thank you! We will get back you with regards your booking within 24 hours.

We are sorry, this tour is not available to book at the moment

136 Accommodations87 Tours
from GEL
from GEL
View all

58 Accommodations17 Tours
from GEL
from GEL
View all

We are sorry, there are no reviews yet for this tour.

Please Note: All mentioned sights in 11 days combine tour to Caucasus “Georgia and Armenia+Nagorno-Karabakh” are already include in the price

Meeting at the airport in Tbilisi. Transfer to the hotel. Check in. 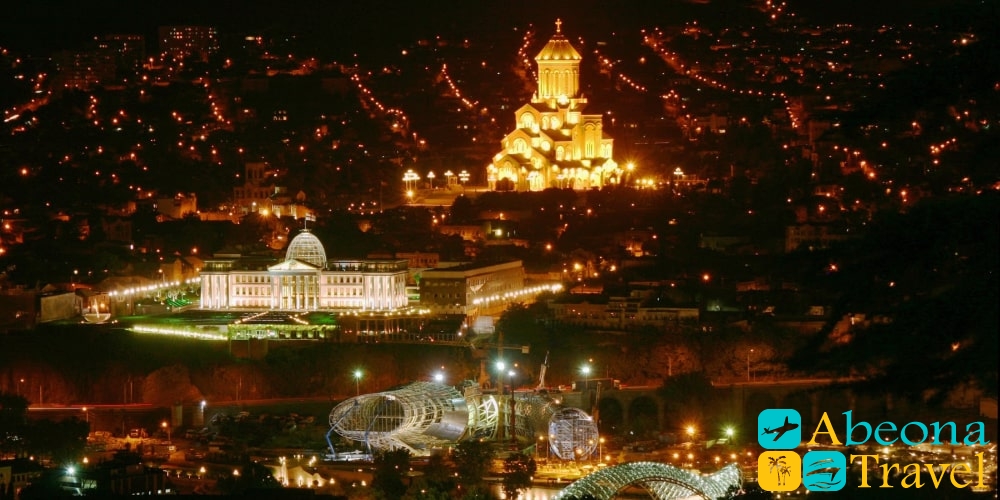 At 18:00 or 18:30 we will start night Tbilisi walking tour. We will explore the Old Town of Tbilisi after dark. Follow your local guide to see top landmarks including Metekhi Church and the Narikala fortress. Visit the observation deck at Mtatsminda to see Tbilisi lit up at night.

Note: If the flight will delay or guests will get tired, we will conduct night tour next day.

Overnight in the hotel in Tbilisi.

Breakfast in the hotel. After breakfast we will be departure to excursion Mtskheta and Uplistsikhe – this is an unusual tour, which will bring you a lot of pleasure. The ancient capital of Georgia keeps many interesting secrets.

Then we will continue the way to Gori.

Breakfast in the hotel. Place to visit today:

Breakfast in the hotel. Departure to excursion in Sighnaghi and Bodbe. Kakheti is not only wine region of Georgia. Kakheti is also famous with main city Sighnaghi – city of love, city of a fairytale in surroundings of Alazani valley and Caucasus Mountains.

Breakfast in the hotel. At 8 am departure to Georgian-Armenian border, At 10 am meeting at Georgian border.

Overnight in the hotel in Sevan lake.

Overnight in the hotel in Stepanakert.

Overnight in the hotel in Stepanakert.

Afterwards we visit a village in the eastern part of the Syunik region of Armenia – Khndzoresk. The main attraction of the city is the “cave city”.  Here people lived in the caves until 1958. In 2012 there was built “Hanging Bridge” over the gorge that connects the two banks of the old village Khndzoresk. The height of the bridge is 60 meters and its length is 100 metres.

The day begins with a visit the journey to the Tatev monastery (IX-XIII centuries), which is located on the edge of a gigantic canyon. Tatev was one of the most famous spiritual and educational centers of the Middle Ages. The complex can be called one of the most noteworthy places on earth. The ropeway “Wings of Tatev” (the longest ropeway in the world – 5752 m, ranked in the Guinness Book of Records) will carry us over the beautiful Vorotan gorge directly to Tatev monastery. 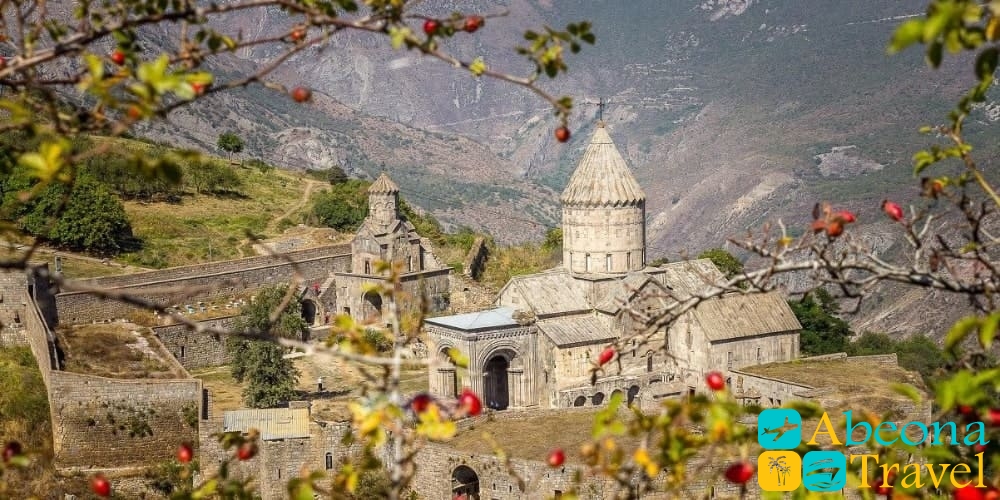 Overnight in the hotel in Goris.

Overnight in the hotel in Yerevan. 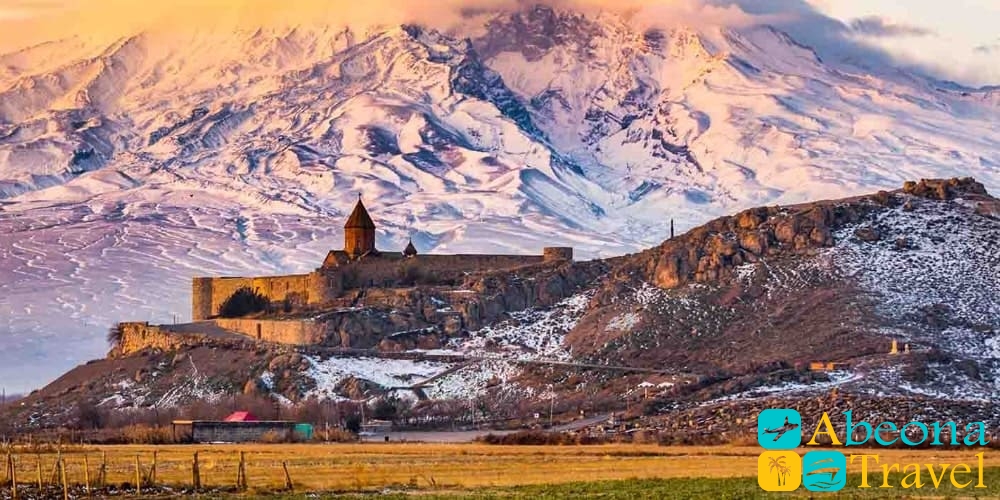 After breakfast, we visit the pagan temple of Garni, built in the I century by Armenian king Trdat I and dedicated to the god of sun Mihr. According to history, the temple was built on the money of the Roman Emperor Nero. Azat River gorge is famous for its basaltic pillars – the result of a volcanic lava flow.

Next stop is Geghard monastery complex (IV century), which is included in the list of World Cultural Heritage by the UNESCO. Its full name is Geghardavank, literally it is translated as “Monastery of the spear”. The name of the monastery complex comes from Christ Spear (Spear of Longinus), which the Roman soldier Longinus thrust in Jesus Christ. The spear is now kept in the treasury of Echmiadzin Cathedral.

Overnight in the hotel in Yerevan.

Breakfast in the hotel. Check out. Trip to the  airport
Happy flight and soft landing! We will be glad to see you again!

What your tour price includes?

More info: Price is per person based on two people sharing a twin/double room. We are happy to accommodate solo travellers – please contact us for pricing.

In case if you will find the cheaper price, please notify us, we will check and try to offer you more convenient price!!!

The company reserves the right to change trip schedule and sequence without reducing the tour completeness.

After every tour, we ask our customers to leave a review on our website. We value our customer feedback as it helps us to evaluate the service of our tour staff. We know that vacations are some of the most important moments in life and we want you to find the best experience.

Leave review and get 5% for your next vacation!!!

How do I get a gift or discount for a review?

Write your review after your trip. Send us a link to your feedback.
We’ll check if the review has been posted and give you a guaranteed gift. Voucher for the next tour or any order. The voucher can be used by your friends, relatives or acquaintances with your permission.

Thanks in advance and have a nice trip!

Do you want to ask a question or book a tour? Use the form “BOOK NOW” or “SEND INQUIRY”

Didn’t find anything interesting for yourself? Since our company is a tour operator in Georgia, we are ready to plan with you your option of an inexpensive tour to Georgia for any number of days and sights of Georgia that you want to visit. Just contact us! You can order a call on the website, write to us by mail or send an SMS with the word “WANT TO GEORGIA” to +995 555 905858. We will definitely contact you as soon as possible.

Here are our top trips in Georgia?

Group tour resting in Batumi - over the course of five days on tour, Georgia will start to open up before your very eyes with the hectic streets of Batumi and ancient monuments of Kutaisi. This tour is a fantastic introduction to the historical cities and sublime scenery of Georgia with friendly locals adding to a bewildering blend of fun activities and cultural enlightenment. Gradually Georgia's doors are opening and the world is beginning to discover the incredible landscapes and culture. Taking a small group tour of Georgia allows you to cover a huge amount of ground while affording incredible insight into this still impenetrable country.

The Story of Eternal Love

"The Story of Eternal Love" - experience the very best of travelling Georgia in just under a weeks. If history and culture fascinates you both, and you love nothing more than learning about new destinations and meeting the people that call these places home, then this culture trip is for you. Experience the history and ruins of civilisations and share this truly eye-opening experience, whilst appreciating the modern day culture of your chosen destination through delicious local food and wine.  Book your trip, book your flight, and go! We handle all the details. Check the calendar to find your tour and reserve your spot! Travel with us without the borders.