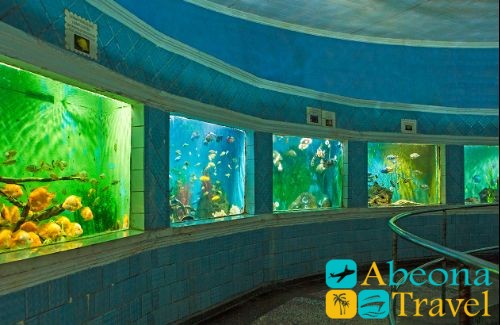 Aquarium in Batumi first was opened for visiting on August 20 of 1966. Initially, the fauna of the northern part of the Pacific Ocean and Caspian seals were represented in it. A special impression was made on visitors by a giant tortoise from the waters of the Indian Ocean. The so-called “false carriage”, which weighed about 100 kilograms.

It is a complex structure. It consists of a demonstration and an experimental part. The total volume of aquarium water is about 200,000 liters. The complex is equipped with devices for aeration and regulation of water temperature. Special filters ensure a long circulation of water, creating a closed system for biological balance. Most of the fish that live in the Batumi aquarium are bred there. It is noteworthy that if fish are in conditions other than their natural habitat, their reproduction is impossible.

Currently, the aquariums inhabits up to 100 species of fauna representatives of the Black Sea, Georgian freshwater reservoirs. As well as many ornamental fish, including rare breeds.