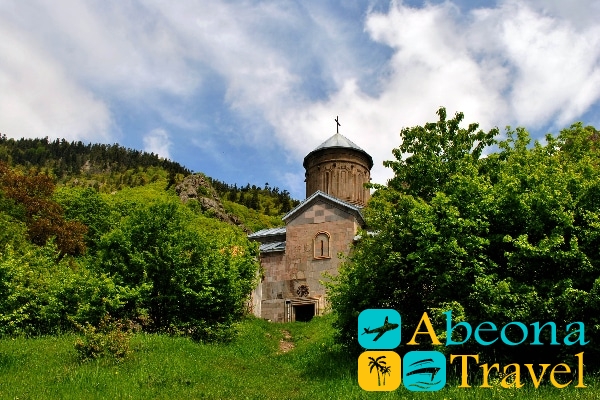 Chulevi Monastery is located in Adigen region, approximately 5km far from Kvabliani River and near river bottom. Name Chule and Chulevi are dedicated to churches only there was no village there. Monastery exists here even from XI century. But only fundament and walls fragments preserved to present time. Big temple of Saint George that is uplifted on this picturesque place built in XIV century, possible in 1381, saying frescoes on the north façade of the temple.

Family Djakeli was an initiators of the construction, ruled in that time. Namely Agbuga Djakeli convert Chule not only in religious but cultural-administrative center.  Legal acts were established here and was arranged main meetings as religious as well as governmental.

Hard times for the regions were the second part of XVI century. Osman Empire invaded Samtskhe. In 70ies of XVI century region was invaded by Turks. In order to rescue religious things (as well as two big bell tower) locals hide those in the forest dig them in the ground. There they were observed accidentally in 80ies of XX century. At the first time bell towers were transferred to Akhaltsikhe ad than returned to the temple.

The another big harm was restoration conducted in 1935-1936 after which ancient chapel was disappeared as well as located to the north-east from main temple small church and some other buildings. Today it is an active friary. Holy mother church is located near the temple of Saint George. Time has ruined it but it was renovated in 2001.