Tandzia is an ancient village in bolnis district and it was the residence of the owners of Kvemo Kartli. In the village there are ruins of the Palace and Church of the XVII century. Here you can visit Sulkhan-Saba Orbeliani Museum of Literature, who was the Confessor of the Royal Palace, the Ambassador of Europe and a famous public figure.

The literary memorial Museum was established in 1984 in the old house of the Orbeliani family in the village of Tandzia in Kvemo Kartli. In the courtyard is the Church of the family court, built by Sulkhan’s father, Supreme judge 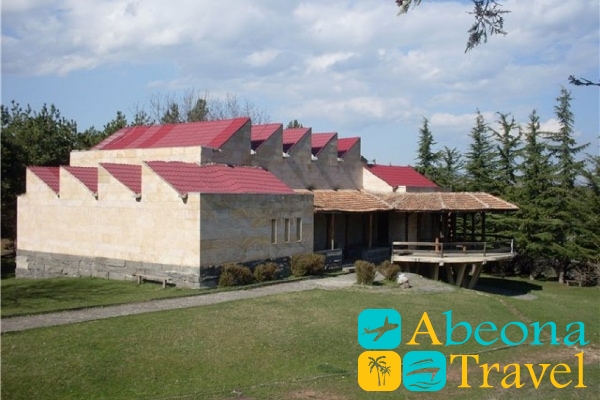 Vakhtang Orbeliani in 1683. the Museum was founded in 1984 and in its collections and exhibition halls are stored and exhibited materials reflecting the secular and spiritual life and activities of the Georgian writer, lexicographer, scientist, translator, diplomat, prominent spiritual and public figure Sulkhan-Saba Orbeliani. The stands contain artistic manuscripts of his works, printed books, etc.

The surname Orbeliani originated from one of the branches of the Baratashvili family and was prominently advanced in the XVII century. Sulkhan-Saba Orbeliani was born in 1658 in the family estate, the beautiful mountain village of Tandzia, located 16 kilometers from Bolnisi. The year of Sulkhan’s birth coincided with the year of Vakhtang V’s accession to the Kartli throne.Vakhtang V married Princess Rodam Orbeliani – mamida (his father’s sister) Sulkhan-Saba Orbeliani. Sulkhan’s mother, Tamar, was the daughter of Eristavi of Aragva Zaal, the leader of the revolt against the Iranian conquerors. Thus, Sulkhan belonged to the highest feudal nobility of that era. Sulhan received an excellent education for his time. His General education was led by his cousin George (later king George XI)

Sulkhan-Saba Orbeliani was married twice. His first wife, Darejan Bagrationi, died in 1683 when Sulkhan was only 25 years old. Presumably Darejan was even younger. It is not known when they married. The ashes of Darejan Bagrationi rest in the majestic temple of Pitareti (XIII century).

The second wife of Sulkhan was the daughter of atabag Samtskhe Tamar, who is visible after the vows of Sulkhan as a monk in the monastery of Natlismtsemeli (David Gareji complex). What prompted Sulkhan to take such a step is still a matter of debate among scholars.

In 1724, Vakhtang VI and his retinue decided to go to Russia. Sulkhan accompanied the king and this was his last journey. On January 26, 1725, in the village of Vsesvyatsky, in the Palace of the daughter of his cousin king Archil Darejan, Sulkhan-Saba Orbeliani ended his life.