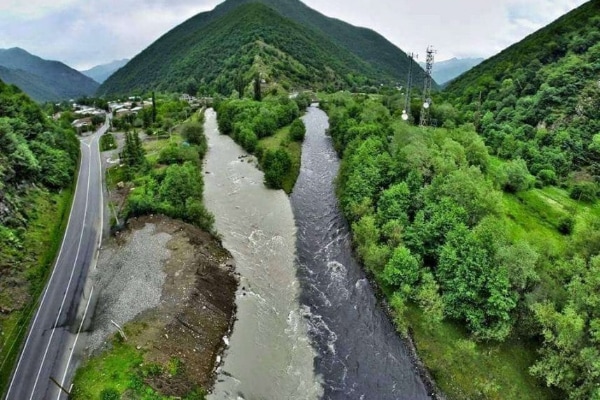 Near the village of Pasanauri on the Georgian military road, there is a small observation deck with an information Board and a statue of deer. It marks the place where two rivers merge-Black and White Aragvi, turning into just Aragvi. Rivers called so for a reason: the origins of each of them contain rocks of the corresponding color, and the waters have contrasting colors.

There is a beautiful but sad legend about this phenomenon:

High in the mountains lived two very loving sisters, one with blond hair and the other with jet-black hair. Both of them were in love with a handsome knight known for his bravery. Knight married the blonde and then the brunette, not to interfere in the happiness of his beloved sister, rushed into the deep abyss. Her tears formed the Black Aragvi. Not survive the death of the sisters, the blonde rushed into the abyss, and her tears gave rise to the White Aragvi. Both rivers-White and Black — as a symbol of boundless love joined at the village of Pasanauri. At the village of Zhinvali joined Plawska Aragvi is a knight, having learned of the terrible misfortune, also jumped into the abyss and turned into a river.