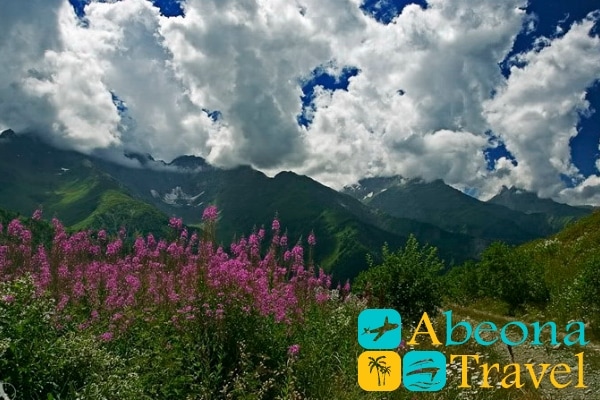 The Foundation of resorts in Georgia began in the I half of the XIX century, although the inhabitants of Georgia since ancient times used mineral water to treat various diseases, and mountain air – to strengthen the body. The main part of the resorts is located in coastal and mountainous areas. The mountainous area of Georgia is characterized by beautiful landscapes, healthy air and numerous springs. On the territory of small Georgia there are more than 340 resort areas, different in terms of a set of natural factors: the presence or absence of mineral springs and mud deposits, altitude, prevailing air masses.

Mineral water sources alone in the country are more than two thousand, and there are almost all known to science their types: carbon dioxide, sulfide, radon, nitrogen, sulfur, etc.

Shovi is located at 1650 m above sea level in Zemo Racha, on the banks of the river Chanchakhi. In the North it is bordered by high peaks of the Caucasus, the average height of which is above 4000 m., from the South, West and East of Shovi crosses the Caucasian ridges. This location protects the territory from the cold Northern winds.

In winter, Shovi is quite cold, the average temperature during this period ranges from -10°C to -13°C. The warmest months are June and July, when the temperature ranges from +16°C To +20°C degrees.

Its appearance is obliged to resort Shovi doctor Shamsha Lezhava. He was born in the village Codici, Ambrolauri district. After high school, the Shamsha went to study in Vienna where he received a medical degree in 1905 – 1910 years. After graduation, Shamsha Lezhava went to journey across European resorts. There he had a dream to open a similar resort in Georgia. July 15, 1925 was laid the Foundation of the first building of the future sanatorium Shovi. Construction was going at a rapid pace and in 1929 a brand new resort Shovi was able to take the first vacationers. During the first year Shovi gained wide popularity, in many ways, this was facilitated by the discovery of 16 types of mineral water. 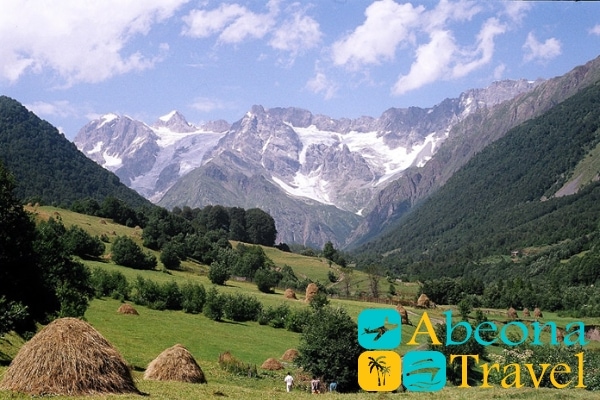 There is practically no entertainment in Shovi. This is one of the favorite places of “ecotourists” who appreciate the beauty of nature.

Utsera is one of the oldest and most beautiful mountain balneoclimatic resorts in Georgia, which is located in the village of the same name, 10 kilometers from the city of Oni.

There Is a legend according to which the name of the village of Utsera is connected with the great Georgian Queen Tamara. Once, during a trip to Racha, the Queen and her retinue visited the village. Seeing the beauty of nature, she exclaimed: “What indescribable beauty is here!”. As a result, the word “austerely” (indescribable?) with phonetic changes stuck in this place.

In Utsera 28 kinds of natural mineral springs come to the surface of the earth. Vakhushti Bagrationi wrote about them in his works. One of these water – “Guerite” – found at the end of the XIX century the brothers Gamkrelidze. This water, helped one of brothers get rid of pressing pains in your stomach. The brothers Gamkrelidze invited medical specialists from Tbilisi, who confirmed that the water has medicinal properties. In 1913-1914, one of French commercial companies are interested in exporting water Ozery in Europe and invited the brothers Gamkrelidze lease of 45 years of their possessions. The brothers agreed on the condition that the local population would use the water free of charge. This did not suit the French and the contract did not take place.

Indeed, in Utsera amazing nature. Here you can see the extraordinary scenery. The resort is surrounded by coniferous and mixed forests, which gives the air healing properties. Of particular interest is the unique alley of 800-year-old coniferous evergreen trees — yews.

In addition to the mountain air, the attractiveness of the resort give therapeutic mineral waters, through which Utsera and became known Spa resort.

The resort is located at an altitude of more than 1.1 thousand meters above sea level. Winter is moderately cold and summer is warm. The average temperature in January is minus 5 degrees, and in August – plus 17. The season starts in may and lasts until October.

The resort Utsera come to treat diseases of the pancreas and liver, intestines, stomach. The recommended course of mineral water, drinking water and intestinal flushing is 24 days.

Utsera resort operates from 5 may to 22 November.