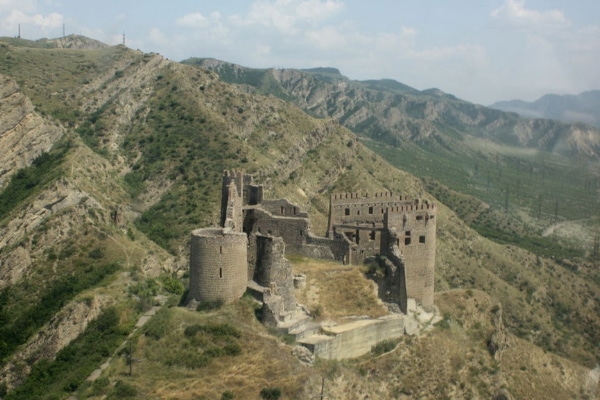 Mukhrani or Samukhranbatono became independent princedom in 1513 during engagement between Kartli and Kakheti. King of Kakheti George the second (named Av-Giorgi or evil Giorgi) carry out several raid. Bagrat brother of king David the tenth solicited Mukhrani and Aragvi ravine as well as Ksani with mokheve and mtiuli under his rule.

At the same time Bagrat built Mteri fortress in Mukhrani which stand a siege of Kakheti army. During another raid Av-Giorgi taken in prison and died there. After his dead his son Vakhtang-Teimuraz inherited village who died in while Marabda battle in 1624. Vakhtang son of Teimuraz became king of Georgia after king Rostom died.

Mukhrani fortress built by Konstantin Mukhran-Batoni in 1733. It is known that fortress built with an assistance of Turkish governor Isaak-Pacsha. Fortress located on the bank of Ksani, area is 2.5 hectare, consist of citadel, which preserved to present time and walls ruined while war with Turks. In XIX century fortress was partially damaged, since locals used stones from the walls to build their houses.

Inscriptions over an gate arches says that fortress uplifted near the Shiosubani village, which doesn’t exist today. Citadel has shapes of square, turret towers located in the corners, inside uplifted church with high golden dome. Church is named after Tsmindagiorgi and is decorated inside. Arrow-loop located on the upper part of turret towers, big and little exedra is located in the fortress walls, only east side one preserved. Diurnal church with images of the cross on the front face stands to the north-east of the fortress.

There is a Armenian church of Grigol Enlightener built in 1844 by Bagration-Mukhranskii dukes for Armenian origins locals of Mukharni village. It is proven also by writing on the east door. Based on legend famous American director Ruben Mamulyan Christianized here, who was born in Mukhrani. Church doesn’t functioning for hundred years and even doesn’t have dome.

Palace of Bagration-Mukhransii dukes and late country estate built in XVI century as well as Shateau-Mukhrani Park are preserved.