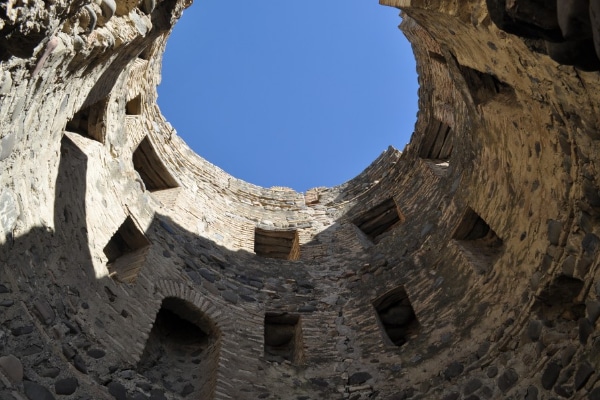 Ksani Fortress or Mtveri fortress is some castle in Mukharani ravine and located on the rock over Ksani River. Fortress built in 1513 by Bagrat Mukhranbatoni in troublesome time for east Georgia when king of Kakheti Giorgi the second named as “evil” (Avgiorgi) carry out raid on Kartli Kingdom. Younger brother of present king of Kartli David the tenth was Bagrat and he fought against Giorgi the second.

Ksani fortress located in strategic point built just for the purpose to conduct a campaign against king of Kakheti. Giorgi the second laid siege the fortress in 1513 when found out about citadel construction and tried to conquer fortress starve into surrender. At the end he found out that Ksani walls are unflinching, defenders has enough reserves of water and provisions for successful and protracted defense he have to left. In 1513, Avgiorgi carry out another raid on Kartli and it was his last raid as Bagrat won the battle on the field and confine him in Ksani fortress where he died.

Fortress was residence of Bagrationi-Mukhranskii dukes during 1513-1733. In 1733 built Mukhrani Fortress below to the bottom of modern Mukhrani village and residence move downhill. Next sic Mukhrani dukes lived in Mukhrani fortress. In 1746, Konstantin Mukhranbatoni renovated damaged fortress. Regarding this fact reads as follows inscription on the stone preserved over an entrance of citadel.

Based on legend enemy carry out raid on fortress, fortress has underground pass up to the river, where fishing and getting water. They said this pass really exists.