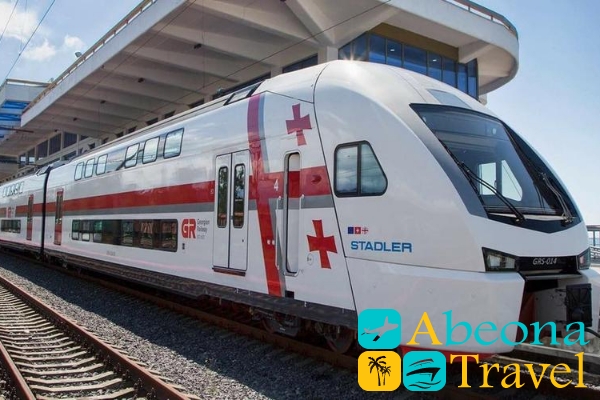 Georgian Railway Road – one the main part of Eurasian travel corridor, the shortest line which connects Europe and Central Asia.

An idea of this connection takes its origin from 30ies of XIX century. Georgia turns out to be in the most preferable location in comparison with other Transcaucasia countries. Main railway line linking Black Sea and Caspian Sea was built in 1865. The first train was built in France on “Bonnefond” factory (Ch.BonnefondpresParis), pass through Poti-Kvirila district (now Zestaponi), first train arrived from Tbilisi to Poti on October 10th, 1872. This date is considering being “birthday” of Georgian Railway Line.

The second stage of construction is considering railway line of Tbilisi-Baku, which was built with the same reason to maintain Eurasian corridor. Railway line Tbilisi-Baku come on stream in 1883. The fact was the basis for export of Azerbaijan oil from Batumi through Black Sea on International Market. Railway traffic between Georgia and Armenia takes its origins from 1899.

Borjomi ravine with its famous resort conditions and famous mineral water of “Borjomi” also was representing a special interest. Romanovs’ started construction of railway line of Khashuri-Borjomi considering the special commercial interest to natural resources of Borjomi; which come on stream in 1894.

Building of light narrow-gage railroad begins in summer of 1897 and lasts 4 years due to difficult climate conditions. First shuttle-train 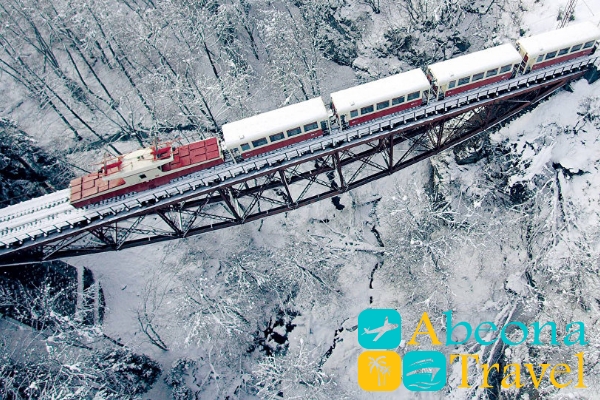 pass through narrow-gage railroad of Borjomi-Bakuriani in January of 1902, this line is serving skiing amateurs and tourists to the present day. Steam train “Porter” type was specially brought from England, for movement in mountainous region. Open type railway coach was connected to steam train and was framed only with hand railing. In 1967 little steam train was replaced by electric locomotive.

Bridge which linked to each other Tsagveri and Tsemi on railway line of Borjomi-Bakuriani was ordered specially in France. The bridge which was built by French bridge builder Alexandre Gustave Eiffel was brought in Georgia in 1902 and was built on Tsemistskali River. 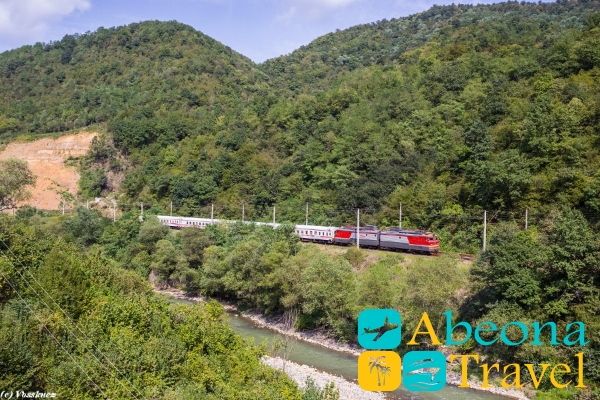 The one of famous date in history of Georgian railroad is August 16th of 1932 when the first electric locomotive passes on Surami Pass. After that time railway lines gradually switch to energization. By the time of 1967 November the Georgian railroad lines as well as light narrow-gage railroad of Borjomi-Bakuriani energization process was finished.

With the development of key industries and agricultural industry of country such as gardening, wine-making, citrus and tea cultures, the following railroad lines were built: Natanebi-Ozurgeti (1924), Brotseula-Tskaltubo (1935), Senaki-Ingiri-Gali (1930). Gali-Ochamchire-Sukhumi (1938), Gori-Tskhinvali (1940).

Sukhumi-Adler railway line construction which starts during the Second World War is linking to each other Georgian Railroad with Russian railroad network. Building has finished in 1949.  In December 31th was finished building of Marabda-Akhalkalaki railroad line.

Construction of many artificial engineering buildings was caused by difficult geographic relief of Georgia, an amount exceed 3700 objects. Total length of railroad line of Georgian railway is 2344.2km.

On April 12th of 2012 “Georgian Railway” reorganized from LTD to demutualized organization.

Do you have any questions or would you like to visit us?