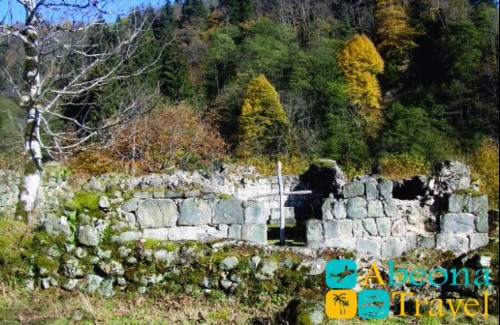 One of the church centers was the Khinoi cathedral after the destruction of the united feudal state and the Gurian Duchy origin. From historical documents it is known that the village of Khino was on the upper strip of the river Kintrishi. In the old days, this village was a crossroads of caravan roads.

For today the name of the former vast territory is a small village located at the source of the river Kintrishi. There are also ruins of the cathedral. The Khinoi cathedral was destroyed during the Turkish invasion. The enemies set fire to the temple. Later, Khinotsmida suffered from an earthquake.

In 1893, the famous Georgian historian D. Bakradze visited Khinotsmida. He described the almost destroyed temple. Up to now, the foundation has been reached. The exact date of the completion of the construction works of the Khinotsmida temple has not yet been established, for this it is necessary to conduct scientific and archaeological research. To date, the monument is registered and is subject to protection.