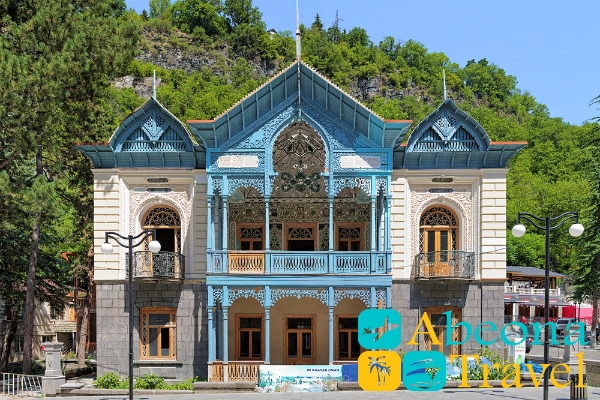 Mirza Reza Khan’s Palace is located in the very center of Borjomi and is one of the most amazing architectural monument of Georgia and build in 1892 spearheaded by Iran Council in Caucasus. Consul fit out house as a summer dwelling.

House has another name “Firuza” which is translated as turquoise. House get its name because of the light blue balcony that decorated with turquoise rocks. Construction is one of the main sight of Borjomi and at the same time is the symbol of the city.

After consul death construction passes to the possession of the city. Once it was a hotel, than museum and even sanatorium. Now it is a house with a museum inside it.

Today this mansion is one of the main symbol and sight of Borjomi. As the many ancient mansions house has secret and tragic history. One of the builder and author of the project was hereditary Azerbaijani architect Yusuf. He was the son of the famous artisan. Once Yusuf swindled out to his parents’ home and dervish who wanted to try to pin him down to reveal some secret had murdered him and his parents. Motive for slaying was unravel and the history describe in the novel of Belgian writer Marie Tegul “White, red and black”.