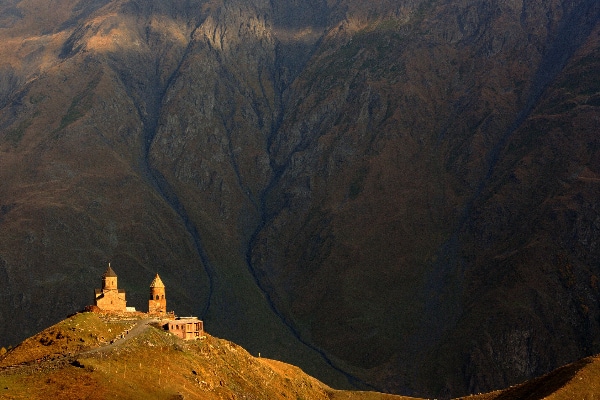 On the slope of the majestic Kazbek Mountain, among the snow-covered ridges, there is an ancient Gergeti Trinity Church. The Church is located at an altitude of 2170 meters, near the town of Stepantsminda and the village of Gergeti, after which it named. It is widely known as Gergeti Trinity Church, and Georgians call it Gergetis tsminda Sameba.

In Georgia, there is a belief that to get to God, a person must make an effort to do so. Therefore, the temple built so high that only true believers could overcome the difficult path to the mountain. There is also a legend that the blessed virgin pointed to the place of Gergeti Trinity Church.

This temple built in the XIV century, but almost nothing known from its history. However, in one of the guides of 1906 it is written that the Church was built on the place of worship of pagan idols. In the XVIII century Gergety Church became the repository of the main Georgian relics, which transported here during the invasion of the Persians in Tbilisi. At the beginning of the XX century, the Soviet authorities closed the Church, and it returned to The Georgian Orthodox Church only in the 1990s. However, throughout its history it was popular with travelers who followed the road connecting Russia and Georgia.