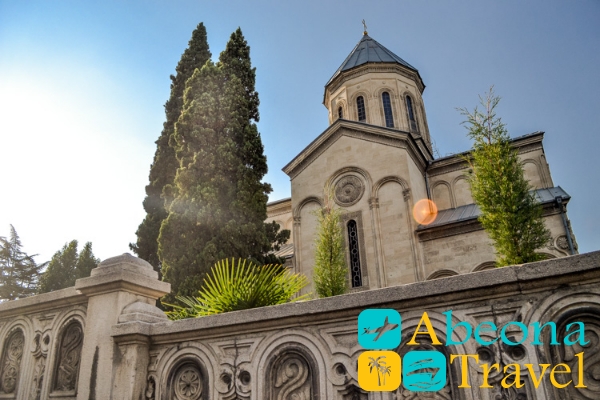 In front of Parliament of Georgia on Rustaveli Avenue, there is another most young and beautiful churches of Tbilisi – Saint George Church, which another way is called Kashueti (Kashveti). Church was built in 1910 on the place of old church. Architectural example become Samtavisi Temple considered to be masterpiece of Georgian Middle Age Art of building. Today church Kashveti is famous with miraculously icon of Saint David. And gracefully ornamental Lord’s Table with lithic lace.

The first temple appeared here in VI century. History of its origin partially concerned to David Daredji. He was one of Assirian fathers preaching Christianity in Georgia. While travelling from Siria, group of monks under leadership of Ioan Zedazni had arrived in Mtskheta, and then they went separate ways. David went to Tbilisi. He setteled on Mtatsminda Mountain and every week he went with preaching. But once one woman spell backward him lying that she was pregnant from him. David predicted she will gave birth to the stone. And cloistered from worldly life living in a hermitage where he had founded monastery of David Garedji. Woman gave to birth the stone and temple in Tbilisi where David was preaching was called Kvashveti. From Georgian “kva” – means stone and “shva” – give birth. 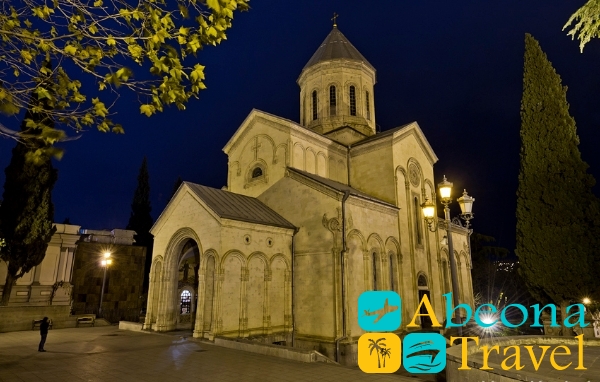 Consequently the church of Saint George was ruined several times and renovated again. Next to the last building was built in 1753 on donation of princely family of Amilakhvari. During 150 years building was fell into disrepair. By the end of XIX century was decided to construct new temple. Money was gathered from donation of rich family and businessmen.

Construction was lasted for 6 years and was finished in 1910. Architector was german Leopold Bilfeld. He had lived for a long time in Tbilisi. And he was an author of many building in town. Construction was headed by talented Italian builder Leonardo Lorintsetti. Painterly redecoration with stone was made by local craftsman brothers Agladze. Elder Neofite Agladze was considered to be the best stone carver in Georgia.

Neofite Agladze was one of the rescuers of the church Kashveti. In 1920 Soviet rule intend to close the temple and to ruin some of other ones. Stone carver found out that it was intended to ruin his work. He complaied to his friend painter Gigo Gabashvili. He asked for the help his friend from the Moscow and decision of decapitating was abolished. So friendship had rescued the temple.

Today Kashveti church team-work of german, Italian and Georgian is considered to be the best architectural monument of Tbilisi implemented in classical Georgian style.