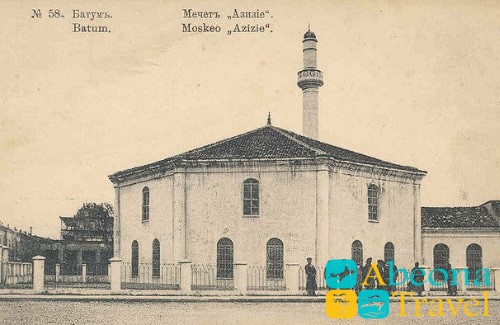 In the city of Batumi there were only three mosques – two stone and one tiny wooden mosque. All of them were built in the XIX century.
The first mosque was built in Batumi in 1861 by the initiative of Pertev Walide Sultan (1812 – 1883), the wife of Sultan Mahmud the II-nd and the mother of Sultan Abdul-Aziz. She built a mosque in honor of her son, so ithe church was named Aziziye. One can only wonder why she built a mosque in such a wilderness. An interesting fact is that she built a very eclectic mosque in Istanbul in 1871, Pertevnial Walide Sultan, which still stands there. 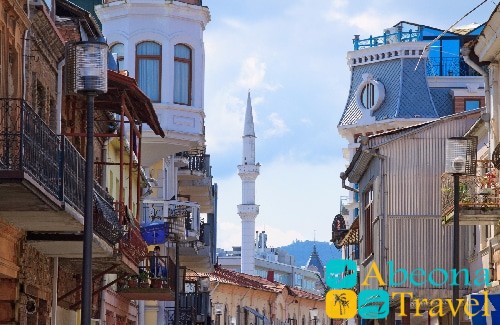 Aziziye had the form of a hexagon with a minaret. It stood at the roundabout to the Drama Theater, on Zviad Gamsakhurdia Street. The mosque was demolished in Soviet times and made in its place the Lenin square. So the oldest and most respectable Batumi mosque disappeared.

The Mufti-Maglasin-Dzhami mosque stood on the modern Chavchavadze Street near the sea. It was a small wooden mosque that was demolished in an unknown era.

The third mosque has survived to this day. It is the mosque of Orta-Ahmed-Pasha, which is located on Kutaisi Street. It is somewhat cunningly hidden in the alleys. But it can be recognized by the minaret. And it is easier to get there from the street Zviad Gamsakhurdia.
This mosque was built in 1866, about which there is an inscription on its facade, on money donated by the mother of the famous public 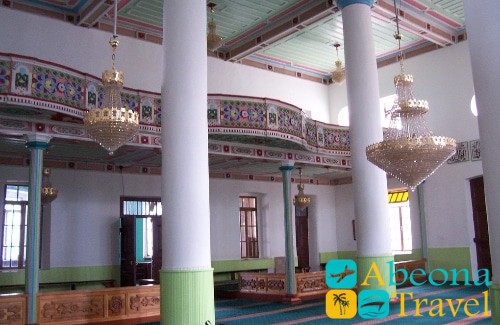 figure of Adjara Aslan-beg Khimshiashvili. The interior of the mosque was amazingly painted by talented brothers from Lazistan. The building is very similar to an ordinary residential building in two floors, but in the architecture one can see something eastern and the minaret also issues the destination. During communists, the mosque minaret was destroyed and restored only in 1992, during Aslan Abashidze. In 2012, a gilded dome was built over the mosque.

In 1932 the mosque was closed, but for some reason they opened it back in 1946. This return coincided with the return of St. Nicholas Church. Now there are long negotiations between the Turkish and Georgian authorities on the construction of a new mosque in Batumi, but so far the negotiations have achieved nothing.

From the historian point of view it is not quite traditional to built a large and pathos mosque in Batumi – Adjara is a country of tiny village mosques, and a mosque of great shapes will be discordant with a common historical course. But suggestion to restore the Aziziye Mosque would be interesting. However, the Batumi public protests against the restoration of the mosque in honor of Abdul-Aziz. Although this sultan was the only one who did not do anything wrong in Transcaucasia.