On the outskirts of the village of Abelian stands Abelia church. The Church has the status of a monument of national importance. The Church of Abelia was built between 1250 and 1259, immediately after the capture of Georgia by the Tatar-Mongols. On the wall of the Church there is a well-preserved inscription made by the old Georgian letter khutsuri. The inscription is made on behalf of the organizer of the construction of this temple Manglisi of Archbishop Arseny Mshvelidze. Abelia church Behind the lines is a great story. Just Georgia was captured by the Tatar-Mongols: “at that time I took up the construction, when the Tatars conquered this Kingdom and the whole country.” 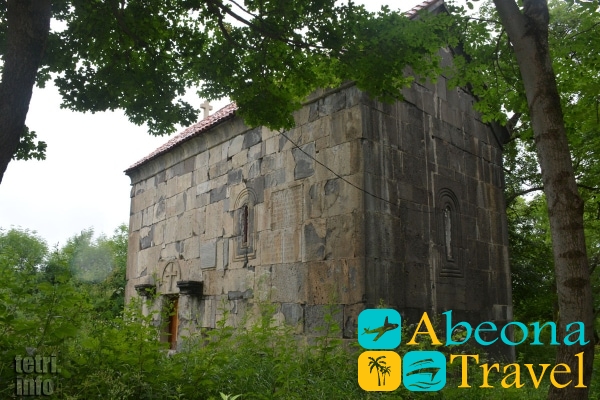 The tactics of the invaders – the fragmentation of the Central government to weaken the state. The Archbishop speaks of Georgia as a single country, but in fact the two kingdoms have already begun. In an inscription brought gratitude from the two kings: “David and David” – both grandchildren of Queen Tamar – David VII, which the Mongols called the Ulu (senior) and David VI Narino sethu (Narin – “Junior”).

Soon the division of Georgia into two kingdoms was finally formed. The inscription also mentions other historical characters. The fate of many of them was tragic. For the first time in the scientific literature, the Church and the surrounding village were described in the late XIX – early XX century by the great Georgian historian and archaeologist Ekvtime Takaishvili: “Abelia lies at the Northern sole of the Sameba Mountain in a rich vegetation basin. The remains of the village and orchards, which have not yet run wild, give the impression that the population has recently left these places. Abelia church also intact. It is faced from inside and outside with aglet stone of good teska.

The Church is a quadrangle with an altar rounding on the East side. Its length by external measurement 14 yards 14 inches, width 7 feet 8.5 inches. The entrance is from the South. There are three Windows, one on each side except the North. The Windows are semicircular, rather high with rope ornaments around. The eaves trough without ornaments. The roof is tiled. Arch Korobovo, holding tight on mighty arches. The walls are intact, only in the Northern part fell out a few stones lining. There are two high vaulted niches in the altar. The salt is raised one step above the stone floor. There were some plaster marks on the walls. Painting has been erased, so it is impossible to judge its character.

The decorations of the Abelia Church are crosses carved on stones – a small one above the Western window and a rather large one above the cornice of the door, above the half-arch. The edges are semi arch-square stones in the form of shelves. But the best decoration of the described Church is an extensive and fairly well-preserved inscription in 23 lines in capital letters khutsuri on three stones, just in the middle of the southern wall.”

Unfortunately, by the end of the 70-ies of XX century the Church did not look so good. In recent years, the Church has been restored.