On the both sides of Kura near Borjomi, there are two Gogia and Petre fortress. Fortresses belong to Borjomi owners’ brother feudal lords Avalishvili. The previous name of the fortress possible was “Kverbis Tsikhe”. And was protected the bridge over Mtkvari and the road leading from Likani to historical old villages Papa and Nua. After Tori was conquered by Osman invasions in XVI century fortress Petra became the center of Osman Administration. Locals had left fortress. 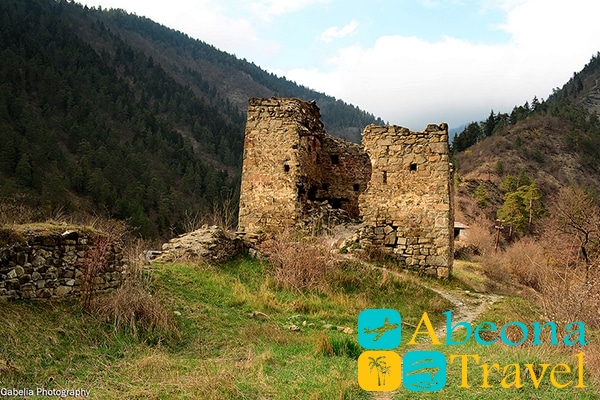 Fortresses Gogia and Petre is the most interesting sight and outstanding example of architecture of X-XIV century feudalism. Fortresses’ peels are upraised over the basement and it makes fortresses visible from a distance. Such kind of peel didn’t built anymore in Georgia after XIV century, both of them was constructed in order to protect an entrance in ravine from invaders especially Turks. Complex was constructed in the way to be able to convey information and communicate between fortresses and to prevent expected danger.

Fortress is associated with tragic events of October of 1812 when Prince Leon had revolted South Ossetia against Russian Rule and was trying to leave through Borjomi ravine in Turkey and was killed here near the fortress by Lezgians.

There is a legend about brothers Gogia and Petre. They were fighting and compete with each other, they became richer by robbing travelers, strong-arming on caravan and especially tradespeople. Sometimes brothers’ army had fight to each other.

Finally brothers make friend, hug each other and pledge love to each other and swear allegiance. A feast begun but even Kakhetian wine was not able to harmonize conflicting parties. As a result a big fight begun. Both sides among with their armies were killed. From that time fortresses left without owners and became ruins.