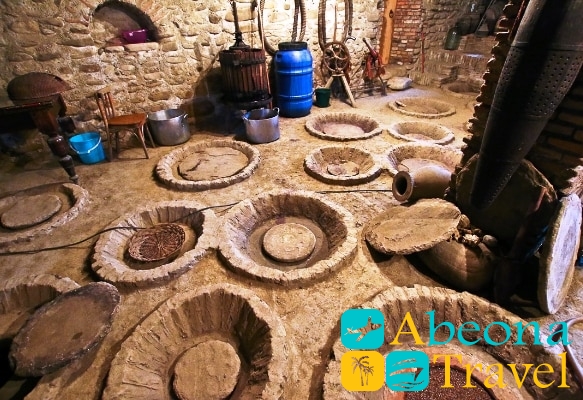 The settlement of Velistsikhe – ancient, it exists somewhere around the V or VI century. Translated from the Georgian “Velistsikhe” – a ” fortress on the plain”, in those years it was one of the major cities in the Alazani valley. The last time the village was lit in history in 1812, during the Kakheti uprising. In this village, the kakhetians last tried to resist the Russian army advancing on Telavi.

The main attraction during these days wine Emma “Numis”. This is a large stone building on the main street of the village. There is a hall with household items, which is really a lot. This clothing, and jugs, and wine press, and all sorts of different. Beyond the hall is actually Marani (wine storage) with embedded qvevri. Between the 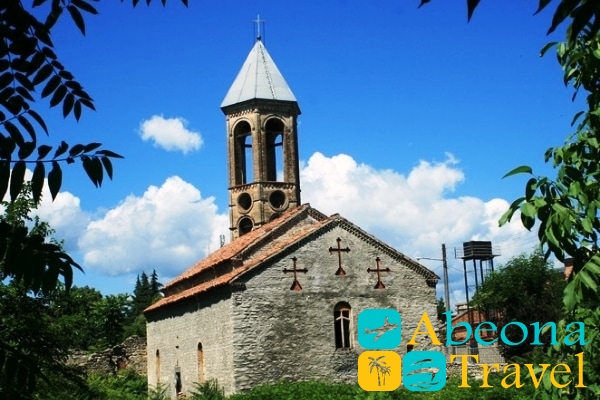 hall and Marani-descent into the cellar, where in the past kept the meat and poultry. Cellar, dark, damp, cold, with a constant temperature of 14 degrees. The Museum has a kitchen hall for tasting. Wine tasting – local Saperavi and Rkatsiteli

Its one attraction is the restaurant ” Veranda Velistsikhe”

There are three churches of different ages in the village. First of all, it is of course the Church of St. George.

The Church of St. George is a one-nave Basilica with an external gallery. The gallery was partially destroyed, and remained only on the North side, which made the Basilica look like a two-nave. Some sources indicate that the temple of the V century.

In addition to the old temple there are two more Temple of the Virgin, later. One of them was built in the XII century, but preserved from that time only the lower part, and the upper part was completely rebuilt in the later era, and on the basis of the bell tower built a high brick bell tower, which can now be called the hallmark of the village.