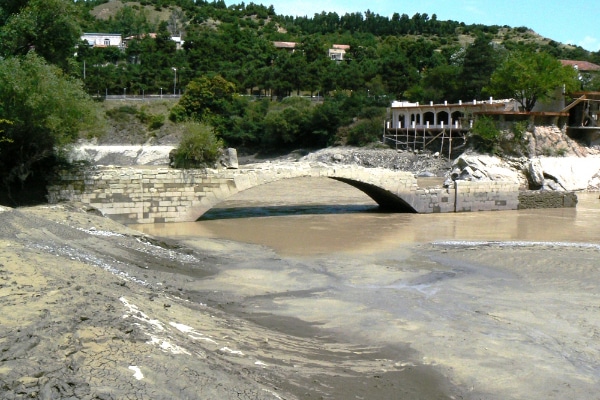 Pompey Bridge is a stone bridge over the Kura River built in the time of Pompey the Great about 65 BC during his war with the Pontic king Mithridates. Since then, it was the only bridge connecting the banks of the Kura. The bridge functioned throughout antiquity and the middle ages, and used even in the XIX century. In the era of King Vakhtang Gorgasali, this bridge rebuilt. What can be seen now was built in the XIX century. Pompey Bridge in Mtskheta 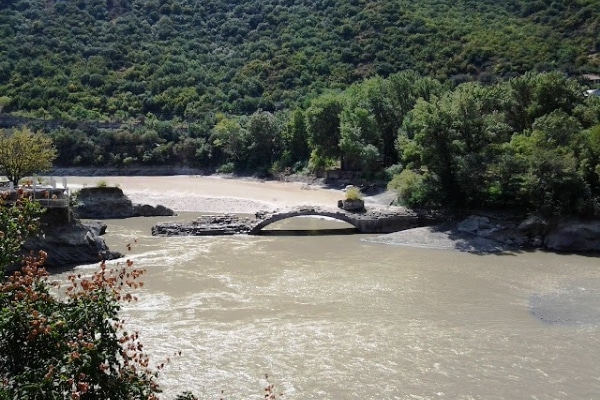 The bridge was part Of the Georgian military road, all the great people like Pushkin, and LF Tolstoy came to Tbilisi from Mtskheta by this bridge. The bridge consisted of two parts – the main part connected the left Bank of the Kura with the island. Moreover, from the island to the right Bank led another fragment, at right angles to the main. Pushkin mentioned the bridge in his notes:” a few miles from Garciscal, we crossed the Kura on the ancient bridge, the monument of Roman campaigns, and a large trot, and sometimes jump, went to Tiflis… “Even preserved an interesting photo of the time, which shows what a huge bridge was.

In connection with the development of heavy transport, the further operation of the bridge became dangerous, and therefore the old bridge destroyed and in the same place in 1839-41, a high stone four-span bridge built. Supposedly, Builder was engineer-Colonel Termini.

The bridge was flooded in Soviet times, after the construction of a hydroelectric station. Now the ruins of the bridge exposed only in those moments when the HPP lowers the water level by three or more meters.