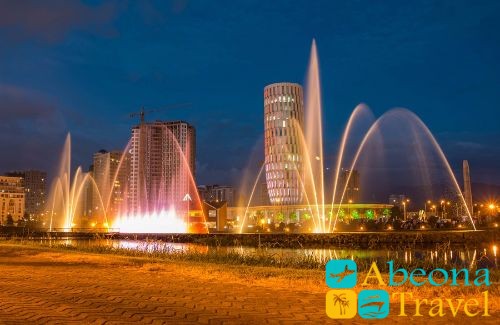 The lake received its name from the district of the capital of Adjara, and the district on behalf of the famous Ardagan detachment. They fought selflessly in the city of Ardagan in the Russian-Turkish war. Several years later quartered in the area. Years later, at the site of the detachment, fortified ramparts were built solidly, directly on which stood fortified coastal artillery. Which reliably protected the sea from the sea to the approaches to Batumi.

The chief of the Ardagan detachment was the first Governor of the Batumi region, Major-General K.V. Komarov.

Then a garbage dump was next to the lake was. But a few years ago, the area bloomed. A modern automobile road was conducted right next to the lake – Sheriff Khimshiashvili Avenue. Which connected the old city with its modern part and the international airport.

Amazing color music fountains, brought from France and not inferior to the best in Europe, are mounted on the Ardagan Lake. There’s no place for the apple to fall in the evenings, when it gets dark. The multicolored streams of water are made up of truly incredible figures to the sound of music.
You will quite often meet a fishermen with a fishing rod, waiting for a good catch for hours on the shores of the Ardagan lake.