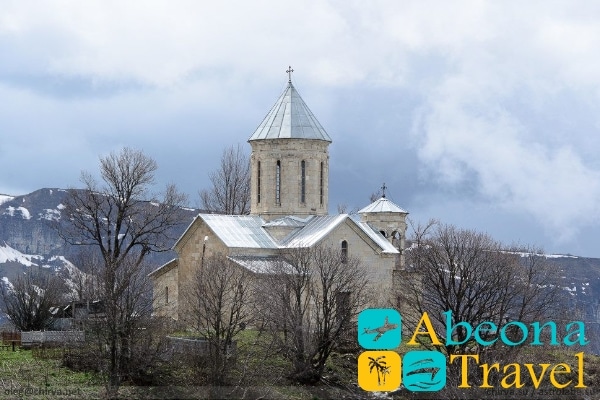 Saint George Mravaldzali Temple is located in the eponymous village Of ona municipality of rachi. Monastic life has been conducted in these places since very ancient times. As evidenced by the ruins of some religious buildings in 3 kilometers from today’s village. But something forced the monks to leave their cells and move to the top of mount Quinzii.

Here in the XI century, during the reign of the glorious Bagrat III, the first Church dedicated to St. George was built. The history of the temple is covered with legends confirming that it was considered the greatest Shrine of the region. The authority of the monks who lived in it was unquestionable. In its original form, the Church existed until 1894.

After Archpriest Mikhail Skhirtladze decided to update and expand it, turning it into a domed structure. Only the Eastern facade of the building preserved its ancient appearance. In the twentieth century, the temple twice suffered disaster. In 1934, it was robbed by unknown robbers. They stole almost all his treasures. Only the helmet of Jalal al-DIN, the sword of the Persian Shah Abbas I and several ancient artifacts remained intact. Half a century later, a devastating earthquake in 1989 almost wiped the temple off the face of the earth. After that, it had to be restored in the literal sense of the word bit by bit. Restoration work was completed in 2009.