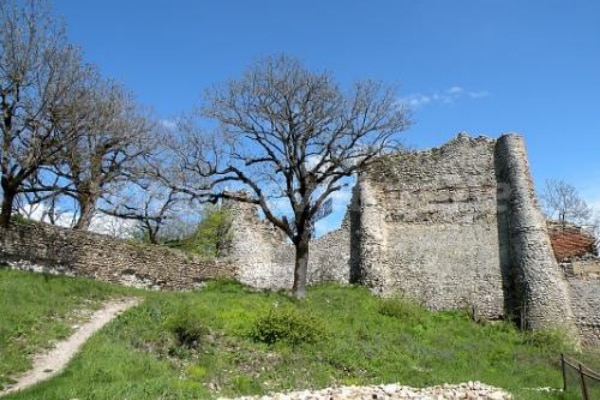 Zedazeni fortress are stander-by martial prowess of many generations of Georgians fought for entity and independence of Georgia. Fortress defend fairway to the border of Kakhetian Kingdom, for this reason fortress mentioned in several sources as “Kakheti gate”. Military post consist of 6 thousand people can sheltered in fortress walls. In south-west part of the fortress were two-storied oriel. Dwellings fit out with lithic tables, bench and shelves. Cold, fresh springs burst in the fortress. Beyond enceinte found sink pile jars for vine storage called qvevri. There are very old origins jars witnesses’ existence of century’s long wine growing culture and wine industry in Georgia.

In 1101 king David the Builder struggling for the consolidation of Georgian dry land begun assault of Zedazeni fortress which was gate of Kakheti and key point of approach of Tbilisi emirate. Besides Zedazedni fortress consolidation system include also Khersck (Saguramo) fortress, kakhetian king Kvirike and his alliance partners Osmans military post located in military defense.

Fighting begun in open field on the bank of Aragvi. Army of David the Builder force to retreat Turks in gory battle, beaten enemy run to the gates in order to escape but warriors break in the gate and beaten them in military defense. David’s army occupied Zedazeni fortress but several military defense hold the field for 5 more days since tree blowdown were surrounded the fortress and among Turks there were a lots soldiers of Kvirike and king David don’t want to shed the blood of fellow tribesmen.

On the fifth day Turks beg for mercy, David the Builder hoisting the flag over the Zedazeni and hand over the fortress to comrade in arms Nianin Bakuriani. After Zedazeni fortress was conquested, David the Builder possess Kakheti during the year and got a head start on to siege Tbilisi. Georgian capital was in possession of foreign invasions for more than 400 years and David the Builder liberated it.