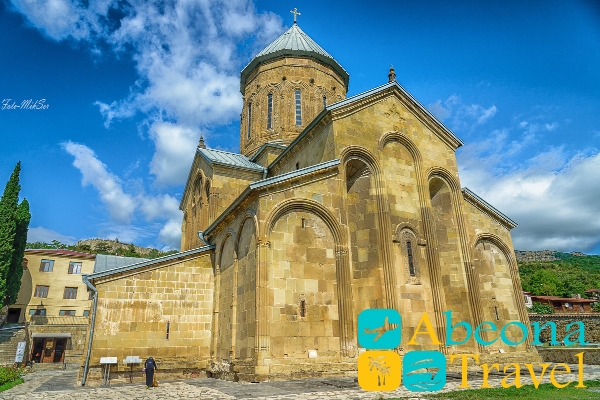 Every stone of Mtskheta filled with a bright and dramatic history of a small courageous country that defended the right to be itself. Christianity has become a spiritual weapon of Georgians, there are many temples and monasteries, and one of the oldest monastic complexes of the former capital of the country — Samtavro.

In the fourth century in Mtskheta was preaching Christianity, St. Nina. Arriving in Georgia, she first lived with the Royal gardener on the outskirts of the city. St. Nina erected a house under a BlackBerry Bush, and in our time — this place known under the name of Makalawena, which means the BlackBerry. After the death of St. Nina in Bodbe, king Mirian built a small Church near the BlackBerry, where she preached, now it is a chapel “small Church of St. Nino”.

When king Mirian converted to Christianity and built the temple of Svetitskhoveli, there was a certain psychological transformation in it, and he decided that because of his sinfulness to enter this temple is indecent to him. For this reason, he decided to found another, simpler. So there was a temple on the site of the BlackBerry Bush and the second temple, known as the” Upper Church”of the Transfiguration – Samtavro Monastery (“lower Church” called 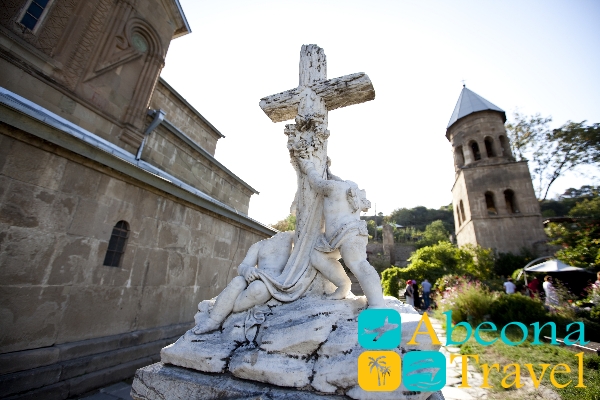 King Mirian died in 361 and buried in this very temple. “I didn’t dare in front of him (Svetitskhoveli post) to dig the earth for his grave – he says – for I have sinned was afraid of him; so he prepared his own grave in the Upper Church to be away from his eyes and to partake of its benefits on the day of resurrection.” The stone sarcophagus of Mirian and Queen Nana can be seen in the corner to the left of the entrance. Holy king Mirian and his wife, Holy Queen Nana, buried in Samtavro, which has since become the tomb of Georgian monarchs and the highest hierarchs of the Church. Perhaps that is why the monastery got its name “Samtavro”, which translated from Georgian means “Royal place”. Samtavro is particularly venerated by the faithful, because here in addition to the graves of the kings are Christian relics — the Iver icon of the virgin, relics of St. Shio Mgvime, grave of Saint Gabriel Staviskogo. At the end of the VI century in Mtskheta was taken from Nekresi and killed by the Assyrian father ABO Nekresi, whose relics thus been found in Samtavro. Now they are not visible, they are in the altar part under the throne.

At about that time, the Church became the Cathedral Church of the diocese Samtavro. The diocese has existed for almost the entire history of Georgia, and was only abolish in 1811. Later it united with the diocese of Mtskheta.

The present Church of Samtavro keeps the appearance it acquired in 30-40 years of the IX century, during the reign of George I. by order of the Catholicos Melchizedek, the temple was expanded, the southern gate was built and decorated with an original ornament, equal to the wealth and subtlety of which is not in any Church in Georgia. In 1283, a strong earthquake destroyed many churches in Georgia, including the cave monastery of Vardzia. Samtavro’s dome collapsed. A hundred years later, Tamerlan allegedly damaged the temple. I had to restore some things. There is a suspicion that the dome restored immediately after the collapse, and at the same time built near the tower. In 1820, the Russian administration established a convent at the Church named after St. Nina.