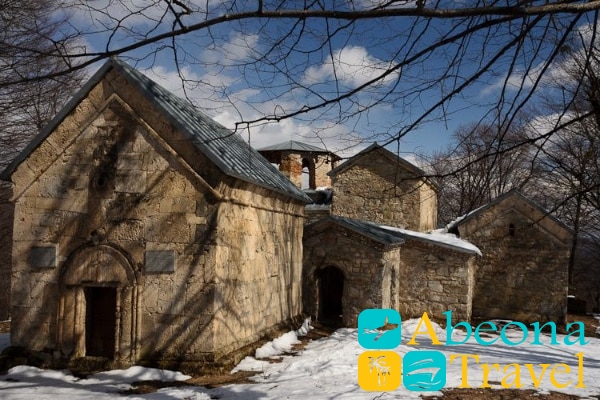 Matani monastery – is a small Basilica appeared here in the fifth century. In the VIII and IX centuries two small churches were added to it from the North and from the South, and in the XVII century there was a bell tower built of brick and a small rectangular hall on the Eastern side of the temple. The restoration of the complex was carried out in the Soviet period, in 1984-1987.

Here you can also see the ruins of the temple, from which there were only dilapidated walls and the altar inside the building.

In the best years, both buildings were completely painted from the inside. Now from this painting, Dating from the XIV century, there is little left, although these surviving fragments can delight connoisseurs. On the stone iconostasis frescoes are best preserved in the upper part, which depicts twelve disciples whose faces are turned to Christ, located in the center of the composition. On the wall of the Western part of the temple you can see a fragment of the assumption of the virgin, right above the entrance — the eye of Christ, and on the southern wall you can see the image of an elderly old man crowned. The Greek inscription says that it is “Saint David”. Fragments of the painting, Dating from the same XIV century.

The name of Caracara translates from Georgian as “desaturata”. At the same time we are not talking about the number of entrance doors. This is a technical term that has existed in Georgian architecture for a long time. In the country there are several temples with a similar name.