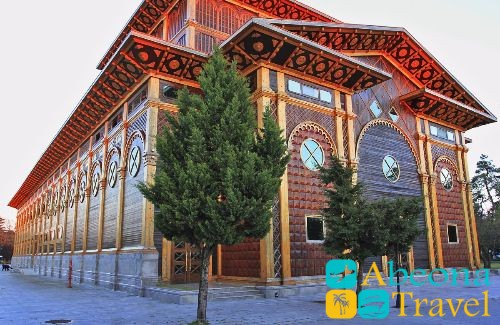 Batumi Summer Theater is located in the heart of the seaside boulevard. The old building resembled a magical oriental ship from afar. The theater was decorated with quadruple columns with carved ornaments, arches, vaulted ceilings, openwork doors, high pediment. In the side facades there were openings which were curtained with tarpaulins. And during the sold-out, the boys, who could not get to the theater, pushed aside the drapery to watch performances or pop numbers.

The theater became widely known for the film adaptation of of Ilf and Petrov’s novel “Twelve Chairs”. Do you remember the scene: Bender once again punishes the former leader of the nobility for disobedience. But the earthquake prevents the completion of the execution? This theater was really destined to perish in 2001. But not from a natural cataclysm, but from a fire. And nothing particularly strange in the death of the theater (wooden buildings burn very often), we would not see, if not for one interesting fact – on the eve of a real catastrophe, all the props and chairs were taken out of the building, as directed from above.

Bogdan Kirakosyan received the second prize in Moscow at the All-Union competition together with K. Javakhishvili, for the project of the old Batumi Summer Theater with 800 seats in 1948. 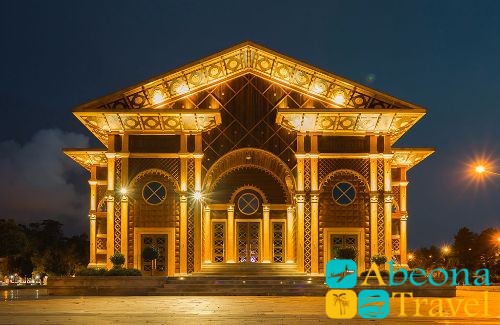 For three years a relatively small building was built leisurely, – the work was delayed quite deliberately, in order to somehow distract public opinion from the pressing problems. And indeed, a lot has been said about the appointment of the pyramid in Batumi. Someone even put forward a version that Abashidze wants to transfer the ashes of his father – Ibrahim.

Modern theater, however, does not differ much from its predecessor. Although it does not fit specifically into the panorama of the boulevard. The cumbersome wooden building is distinguished by its original architectural style and wooden ornaments. The ceiling of the theater creates an imitation of the starry sky. Tamara Gverdtsiteli was the first who open the new season in the new old Summer Theater. She, together with her friends from different countries, appeared with a wonderful concert program within the framework of the international festival of music. The summer theater is  functioning since 2013 in the renovated form.