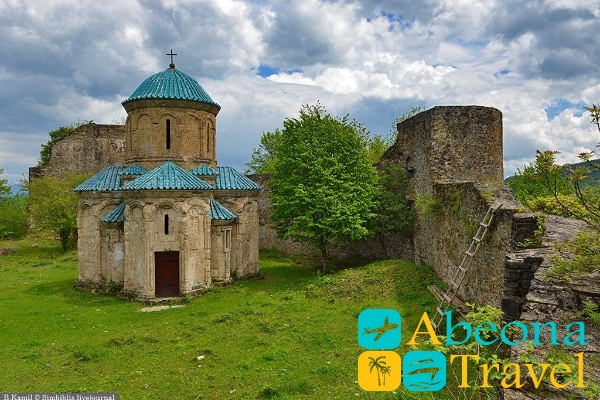 Kvetera church – usually under this name involve the temple of the X century. But on this site there are also ruins of a fortress. And once there was a city, presumably so called – Kvetera. In the Chronicles this place was first mentioned in the XI century. But the instructions of individual chroniclers include the Foundation of the city to the VIII century, which is confirmed by archaeological excavations.

In the first third of the XI century king of Kakheti, Kvirike III (1010-1037), divided the land subject to him (Kakheti and Hereti) 7 principalities (“saeristavo”), among which Koterski played a special role. In the 40 – ies of the same century, when the Georgian king, Bagrat IV, who sought to strengthen the centralized power in Georgia, tried to curb the obstinate feudal lords, the only city-fortress, which he did not submit, it was Quetera. After the XIII century Queter in historical documents is not mentioned, from which it can be concluded that the city at this time was empty and lost its value.

Archaeological and repair work on site Kwatery was held in the Soviet era. The first in 1968-1970, and then from the mid-1980s. But were not brought to the end.

What has come to our days? Kvetera is on a hill and covers a very large area. It is surrounded by a stone wall, equipped with evenly spaced defensive towers. The three of them and has survived in battered form. Of the buildings are three buildings: a Palace and two churches (hall and dome). The Palace was built in the X-XII centuries and was two-storey. Separating floors today collapses and judge the purpose of the floors is possible only on certain preserved on their walls traces. Inspect the ruins is not easy — everything is very much overgrown with bushes. The Church, which stood on this place even before the construction of the fortress wall, was severely damaged. It was equipped with an extension, from which there were only one and a half meter walls.