Skhvilo fortress is the former residence of the princes of amilahvari, one of the main fortresses of the late feudal era in Kartli. Around Skhvilo fortress rise mighty mountains, surrounding the fortress. Enemies who tried to approach the fortress were always visible at a glance. The place is so beautiful that today everyone who gets here, admires the view from the wall of the fortress.

The walls of the fortress were built much thicker and higher than usual. The average wall thickness is 2 meters, the height of the walls is 8 to 10 meters, and both towers had 5 floors. Total fortress Skhvilo occupied an area of 600 square meters. At the same time, it was very, very difficult to attack this fortress. And, despite the fact that the fortress many times fell into a variety of combat battles, its walls are almost completely intact, which can not be said about those structures that are inside the fortress itself. There was almost nothing left of them. 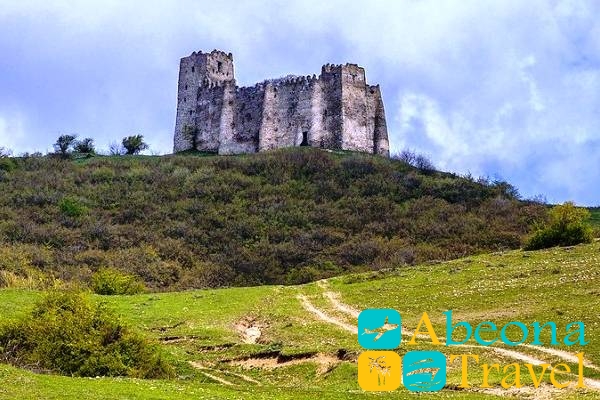 And only in one place on the South side of the wall an attentive person can find traces of the excavation. Although the fortress fell into enemy hands several times due to lack of food.

According to the buildings we can say that it was not just a fortress, but a real Palace of the feudal Lord, where he lived with his family. And life in the fortress was not so harsh and difficult as it might seem at first glance.

Here today you can find the ruins of residential buildings, a Church, a reservoir, a barn, and many other buildings for economic purposes. The original Church was built in the 5th century by Vakhtang Gorgasali. Then another room was added above the Church. Exactly the same premises were attached to the sides of the Holy temple. This was done when the building itself ceased to accommodate all those wishing to pray and attend the service. This means that the population of the fortress increased every year, which gives reason to think about the important strategic importance of the object.

Already in the XVII century, the fortress of Skhvilo was of great state importance. In 1629, the formidable enemy of Georgia Shah Abbas died, and the ruler of the country Teymuraz I tried to get rid of submission to Iran. And to do this in the first place just had to get rid of king Simon II, who at the time was in the fortress Skhvilo. Force take fortress was virtually impossible, and then Teymuraz I went on deception. This Georgian ruler attracted to his side eristav Zurab of Aragva, who was on friendly terms with king Simon. And Zurab, as his man, quietly entered the fortress and killed Simon II. This event occurred in 1631.

In 1632, the Shah of Iran decided to appoint rostom as king of Georgia. However, Teymuraz does not want to accept such a decision, and begins to gather around him a lot of loyal people. And one of these supporters was at that time Item Amilakhori. It was to this man that this region and the castle itself belonged in those days. But to the great disappointment of Teimuraz, Iotamus did not want to go against the new king, and then the angry Teimuraz simply took and destroyed the fortress of Skhvilo. This event happened around 1636.

About what happened next with the fortress, nothing is known, but if you look closely, you can understand that after the severe destruction of the fortress, construction work was carried out and some buildings belong to the period when the fortress tried to restore. Later, this fortress played a major role in the war between Georgia and Iran, which took place in the XVII century. This war is well described in history. And the main commander of the Georgian troops in that war was Givi amilakhvari.

Prince Givi amilakhvari (1689-1754) is known for many glorious deeds. For example, this man used his influence to protect the main Georgian Orthodox Church Zion Cathedral from becoming an Islamic mosque. A little later, the king of Kartli Teymuraz II appointed him Governor of Tbilisi and under the patronage and financial support of Givi amilakhvari, Orthodox churches and monasteries were built throughout the country.

However, the war that was fought with Iran was still lost, and the Shah of Iran ordered the destruction of all the fortresses belonging to amilakhvari. Following this order, the Suram fortress and The kehwa fortress were almost completely destroyed, but Shhvilo did not suffer such a fate. And after a while Skhvilo again began to belong to the genus amilakhvari. However, unfortunately, what happened to the fortress after the 18th century is not known for sure.