Tower of the Georgian alphabet 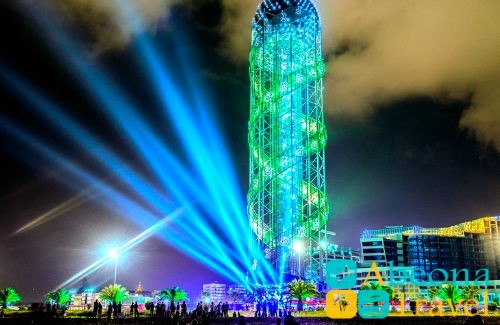 In the Georgian alphabet 33 letters, 28 consonants and 5 vowels (originally there were 38). Because of the height of the tower they had to add letters to the second circle. So the quantity of letters is 64. From the early centuries the ancient Georgian letter mrgovani was used. According to the Georgian author of the 12th century Leonti Mroveli, the Georgian alphabet was created by King Parnavaz in the 3rd century BC.

However, historical science believes that this is a medieval legend. Since the preserved early monuments of Georgian writing date back to the V century. But everything changed when an artifact proving that the Georgian script existed as far back as the 11th century BC was found. At the moment the Georgian language takes the second place out of 14th, among the rare living languages of the world. If the finding will confirmed by modern scientists, the Georgian language will be the first living language among rare, overtaking Chinese.

The tower of the alphabet was built by the modern Spanish architect Alberto Domingo Kabo. Construction began on 10th October of 2010, and ended in 2011 December. The height of the alphabet is 130 meters. Revolving restaurant is at the very top of the tower. Which makes one cycle within 45 minutes. The Georgian government sold the tower to the Spaniards for a symbolic 1 lari. But it sold with the right to repurchase in the future after Saakashvili’s leaving.

Tower of the Georgian alphabet