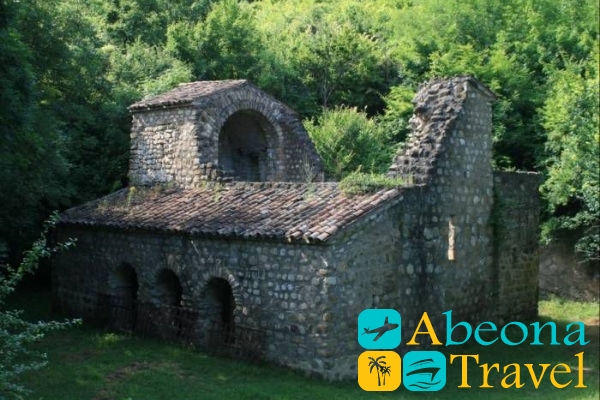 Sabatsminda Church in the village of Gurjaani district of Georgia – is a comfortable complex of two churches: the Church of the XVII century with earlier elements (presumably VI) and the Basilica of the VI century

In Heiti, high on the mountain, presumably in the 10th century, was founded the monastery of St. Sava, which partially survived to the present day. It consisted of the Church of St. Sava (was destroyed in an earthquake in 1991), monastic cells, from which there were only stone foundations and a well-preserved cylindrical tower (presumably built in the 17-18 centuries.).

The whole monastery was surrounded by a wall made of huge stones. In the center of the monastery complex is a tower. According to the stories of local residents on the ground floor of the tower came out of the ground source, and there were large clay vessels-Kvevri, designed to store water and wine. The second floor was residential, but the third – for defense. According to legend, it was in this tower that king Vakhtang spent the night, before leaving for Russia in 1724. Even higher on the mountain (where I, unfortunately, did not get), there is another old tower. In her 20 years he lived a monk-hermit. When in 1926 the tower was climbed by the people, they found it incorrupt relics. But, young pioneers-Komsomol members simply threw out these relics in a ravine.