Jikheti Monastery is located in the village Jikheti on the mountain Nigoiti. The monastery was restored at the turn 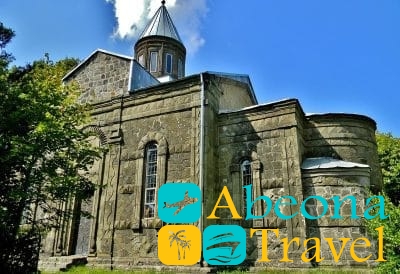 of  XIX, on the basis of the Foundation of the old monastery of XI century. The Main temple is the Church of the virgin, which was built in 1896 by Ilarion Menabde, a resident of Ozurgeti. Jikheti Monastery was built in honor of the angels Michael and Gabriel. The date of its Foundation is unknown. The frescoes on the walls date back to the XVI-XVIII centuries.

Jumati monastery is known for its unique ancient things. There were many expensive icons, inscriptions that testified to the dates of history. A special place in the Treasury of the monastery is a huge cross with gold balls in the shape of a domed Church. In the arms of the cross were pictures of saints. And he himself was in deposits of precious stones. The temple is notable for the fact that it is made of stones brought by the rector from different parts of Georgia.

There and stones from nabeghlavi, and boulders of rachi, and sandstones of Bakhmaro. Inside the new Church there are icons brought from Syria in connection with the “Syrian miracle”. Today, Gicheskaya female community consists of 25 nuns, the oldest of which recently turned 85 years old. Once, in one of the cells Jamskogo monastery lived a monk Feodor (Temur Chikhladze), brutally murdered in 1984 in connection with the sensational case about the hijacking of the plane in Tbilisi.